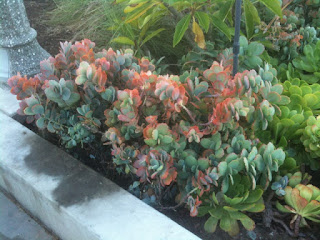 It’s been raining for days. I like the rain.
Bob and I fell in love on a rainy day in March so we always welcome the rain. We like the sound of it on our roof. I love the way my garden looks in the rain or just after. We grow mostly succulents in various shades of green and pinkish red, and the rain makes those colors pop. It’s almost like a garden of wild flowers especially since so many of the plants are shaped like flowers. I also like to see the hills after the rain. They seem to take on an extra coat of Technicolor green. The rain completely revitalizes the usual dry tan fields  so prevalent in southern California.
The storm we’ve been having is the worst in ten years they say. But I remember one about a year before Paul died. It rained for a lot of days in a row like it's doing now, and he hated being cooped up in the house. He couldn’t get out and do his usual wandering or smoke breaks outside. He said it was driving him crazy and then he chucked, realizing what he had just said. At least he had a sense of humor about his bipolar disorder once in a while. Weather seemed to affect him. As a child he loved the cold weather. That’s what attracted him to New York. But after he got sick he couldn’t stand the cold and dark winters there. He must have had a touch of seasonal affective disorder as well.
Here's an article (December 8, 2010) that denies the myth that suicides are more prevalent during the holiday season:
Winter Holiday Suicide Myth Continues to be Reinforced in Press
Annenberg Public Policy Center Study Finds
The annual analysis by the Annenberg Public Policy Center (APPC) of news reporting during the previous winter holiday period reveals that newspapers continued to perpetuate the myth that suicides rise during the holidays. The proportion of stories that supported the myth during the 2009-2010 holidays remained at approximately the same level as during the previous holiday period.
Released today, the APPC study shows that nearly 50 percent of the articles written during last year’s holiday season that made a direct connection between suicide and the holiday season perpetuated the myth. That represents a small and statistically non-significant increase from the previous holiday period when about 38 percent supported the myth.
The rate of suicide in the U.S. is in fact lowest in December, and peaks in the spring and fall. Data collected by the National Center for Health Statistics show that this pattern has not changed in recent years (2007 is the most recent year for which national data are available).
As part of its efforts to improve coverage of suicide in the press, APPC has been tracking holiday suicide reporting since 2000 when it released its first press alert on newspaper coverage of the myth. There has been improvement in coverage over this time period, but progress in recent years has slowed. In the 1999-2000 holiday period, only about 23 percent of the stories that made a link between the holidays and suicide debunked the myth. Although this percentage has increased over the years, it only increased dramatically during the 2006/07- holiday period when it reached 91%. In other years, it has hovered around 50%.
“It is unfortunate that the holiday-suicide myth persists in the press,” said Dan Romer, the director of APPC’s Adolescent Communication Institute, which conducted the study. “Aside from misinforming the public, the sort of reporting misses an opportunity to shed light on the more likely causes of suicide.”Considerable research indicates that mental health conditions, such as depression and abuse of drugs, can increase the risk of suicide. While persons suffering from these and other treatable mental conditions are at increased risk of suicide, getting help from an appropriate health professional can reduce this risk. The press can play a role in encouraging those suffering from these mental health conditions to seek help and to do so at any time of the year.
“The press has an important role to play in debunking the holiday-suicide myth,” said Kathleen Hall Jamieson, director of the Annenberg Public Policy Center. “It is essential that the public be given accurate information on this important subject.”
Persons with serious mental health conditions are also vulnerable to media reports of deaths by suicide, particularly those that describe the method or glorify the act. The press can help to reduce the chances of such “contagion” effects by following the media coverage recommendations developed by the Centers for Disease Control and Prevention, the National Institute of Mental Health, the American Foundation for Suicide Prevention and the APPC among others (see American Foundation for Suicide Prevention). There is also a national suicide prevention lifeline (1-800-273-TALK) that is ready 24/7 to assist persons coping with suicidal crises.
According to the Centers for Disease Control and Prevention, suicide ranks as the eleventh leading cause of death among adults. Among adolescents, it is the third leading cause. More information about suicide is available at the following sites:
http://www.cdc.gov/ViolencePrevention/suicide/holiday.html
http://www.cdc.gov/violenceprevention/suicide/
Posted by madeline40 at 6:05 PM

I love the rain. I see it as being cleansing, renewing and refreshing. Thanks for sharing this post and the beautiful picture. :)

I totally agree, Melissa. Your words are perfect: cleansing, renewing and refreshing. Rain never depresses me no matter how long it lasts.
Thanks!