Paul loved to climb -- trees, rocks, up the highest diving boards. He also loved skiing and parasailing. He was fearless. Here's a photo of him sitting comfortably up in a tree's vee. 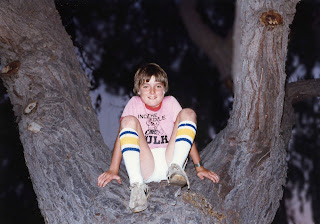 Unfortunately his favorite climbing tree at the end of our driveway in front of our house died, and in his memory we planted a coral tree on the first anniversary of his death. We can't keep up with its heavy growth. Here's Paul's tree of life on a foggy morning in Manhattan Beach. 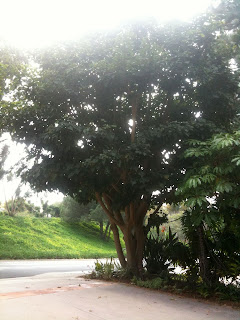 This morning while I was walking along the beach I met a woman I hadn't seen for a long time. We were at one time tennis partners way back when I played on a very cutthrout tennis team. The subject of Paul came up very quickly because her daughter is bipolar and doesn't want to recognize that she is ill -- because of the stigma of mental illness. My friend is a physician and knows the truth that bipolar is a disease just like any physical disease. If it's treated it can be controlled. And it doesn't help not talking about it or not wanting to admit you have it. Paul was a master at that.  He could have won an Academy Award for the way he was able to hide that anything was wrong with him. She said her daughter is the same way.


So, this next suicide prevention organization is about saving people through education and erasing the stigma -- a subject so important to me.

SA/VE is dedicated to prevent suicide through public awareness and education, reduce stigma, and serve as a resource to those touched by suicide.
Brain illnesses such as depression, bipolar disorder, schizophrenia or other mood or anxiety disorders, when left untreated, may also result in suicide.  T he brain as an organ can get sick, just like other organs in the body.
SA/VE is committed to educating the general public about depressive brain illnesses, the symptoms, possible causes and the need for professional assessment and treatment. Education of the general public about these illnesses, encourages treatment and reduces or removes the stigma associated with suicide and brain illnesses.
SA/VE's prevention and education programs are designed to:
·     Increase knowledge about depression, other brain illnesses, and the need for assessment and treatment as suicide prevention
·     Increase knowledge about symptoms of depression and the warning signs of suicidal thinking and behavior
·     Increase understanding and the use of intervention skills that can help avoid the tragedy of suicide
·     Increase knowledge about community resources and how to access and use them.
For more information about Suicide Awareness Voices of Education (SA/VE) go to:
http://www.save.org/
Posted by madeline40 at 1:50 PM