Ace Antonio Hall is back. Hooray!

I am so happy that Ace Antonio Hall has agreed to come back to Choices. He wrote a wonderful piece about the gray haired women in his life in July and got a huge readership. Please take a look here. His writing is endearing and insightful and so, so loving. 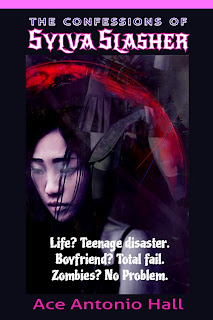 Today, he’s going to discuss his novel, Confessions of Sylva Slasher and try to convince us to read it. Thank you, Ace, for being so generous with your answers.

Madeline: Please tell me why I should read your zombie horror novel, Confessions of Sylva Slasher ?

Ace: Reading my novel, Confessions of Sylva Slasher, is like drinking a large exhilarating can of fun, with an added lemon twist on the end! It's a coming-of-age story about a young girl who has to realize that she doesn't need any guy to validate her, the power comes from within. Once Sylva gets that, she faces her fears with courage and is able to overcome her “undead” challenges she calls deadheads. Listen, I grew up enamored with Alfred Hitchcock stories, and watching the Twilight Zone, so speculative fiction, and creating page-turning cliffhangers have become a part of my DNA.

Madeline: Why do you love that genre?

Ace: To me, zombie stories speaks on different levels outside of horror: the state of the world, humanity's fear of the unknown regarding death and the future of our society. Many undead stories are commentaries on the way corporate and government machines literally have us stumbling through our daily lives like mindless zombies while their economic power stumbles our ability to speak out or resist quick enough to gain any true momentum in our own lives. Then again, I want my readers to finish the book feeling satisfied, and happy that they bought a Sylva slasher novel, and for me, writing about zombies allows me to do that.

In fact, many people who didn't really like zombie stories before have come back after buying my novel and said they can't wait for the sequel because they enjoyed reading a story that was fun, yet touched on other issues. It reminds me of the commentary I hear about the AMC show The Walking Dead, where people say the plot is not about the danger of the zombies but the danger between the survivors and how they deal with the apocalypse. That's exactly the way I tried to write a Sylva Slasher novel.

Madeline: When and why did you make the transition from song producer, performer, actor to writer?

Ace: One of the reasons, I honor, write and champion the female species is because I grew up with my grandmother. I saw all the trials and tribulations she went through, and being that she took me into her home when she was seventy-years-old, I saw many of her challenges. That's why I fall in love with stories or games with strong female protagonists. Take for instance, the video games Tomb Raider or Resident Evil, which both feature female characters. I will always tell stories that deal with the terrible conditions women go through and the triumphs they overcome. It speaks to my heart.
My grandmother introduced the Rat Pack to me, and so Frank Sinatra, Dean Martin, & Sammy Davis, Jr. left an imprint in my makeup, as well as Fred Astaire. They all came from vaudeville-like backgrounds, singing, dancing and acting for audiences, so it was inevitable that I got a degree in film making, while I produced and performed music. I taught school and became an actor, and translated my many experiences in drama, and love for horror, into writing.

Truth be told, my real middle name is Nzondi, an African name given to me by my father, and growing up, many of my friends called me zombie. It's true what they say about being careful how you treat authors because many of those who teased me have become horrible decapitated zombies in my novels. (insert Vincent Price laugh here)

Madeline: Sylva Slasher is traditionally published. Please tell us how you found your publisher.

Ace: For one, there's no easy answer. David Gerrold, who wrote the Star Trek Original Series classic, Trouble With Tribbles, told me that until I wrote one million words, it was all practice. Well, I wrote about eight-hundred-thousand before getting a deal. The first few novels were really crappy, and it took me a while to learn how to write a good story that even people that didn't normally like the genre were intrigued to read.

Part of getting Confessions of Sylva Slasher published by a traditional publisher, was my involvement with a writing society that introduced me to award-winning authors, and their informative panels on writing. Also attending conferences, continually crafting and polishing my writing with classes and workshops, in which I learned how to write effective query letters, and networked with people who shared their personal experiences of success and inspirations.

I also joined a critique group that was instrumental in my writing process. Here's a link to an article I wrote as a guest blogger here:
http://www.writersfunzone.com/blog/2013/06/04/finding-a-writing-critique-group/

A literary agent told me to read in the genre that I wrote so that I would understand the tropes of zombie fiction, so I set out to read over 50 stories and books to get an innate sense of what was relevant, ridiculous, outdated, trendy and paying homage to the genre. However, and perhaps most crucial was my focus. After Ray Bradbury told me to visit the library daily and write, write write, I went from writing 1,500 words a day to 3,000 words. My focus got so strong, I woke up at 4 a. m., every morning and wrote before going to work, and I buried myself in the library and/or corner of a Starbucks from opening to sometimes closing. On many, many Saturdays, I went to Starbucks and put in 12-15 hours of work in one painfully, butt and back-burning sitting to get my writing done.

The story is about a teenage martial artist/necromancer who has many internal conflicts and challenges to overcome and I dedicated the book to Ray Bradbury for inspiring me to finish it, which is ironic because the publisher is Montag, who is a character in Mr. Bradbury's book Fahrenheit 451. Talk about match made in heaven.

Madeline: What other writing projects do you have in the works?

Ace: I have a short story called Dead Chick Walking being published by Calliope Magazine coming out this fall. Currently, I am working on a Sylva Slasher sequel called Crystal Coffin, which includes a short story I wrote called Raising Mary, which is about the calamities that occur when an eight-year-old rich girl hires Sylva to raise her famous ancestor, Mary Shelley from the grave, as one of the girl's last wishes, who is gravely ill from leukemia. The entire novel uses Raising Mary as back-story and involves a larger plot, but the formula for making the story full of fun, action/adventure, terrifying zombies, and stomach-turning twists will be the same. My hope is that everyone who buys a Sylva Slasher novel will enjoy it thoroughly and will spread the word.

Madeline: I met you at The Greater Los Angeles Writers Society events. What is your role there? Do you recommend writers join professional societies like GLAWS and why?

Ace: When I first started, I was just a volunteer, but my role soon grew to events chairman, to a critique group leader, to vice president of the entire organization. After about two years, of spreading myself thin, I re-calibrated my focus and worked solely on finishing the rewrites of my novel. Because of all the people I met and learned from, I was able to make my novel a fun, page-turning story with characters that come off of the page and into the reader's living room. I never would've been able to write the book I did and get so many wonderful reviews without having joined GLAWS.

I recommend writers to seek out professional writing societies in their area or online. The networking, events, panels, and conferences are extremely valuable. Authors should congregate with other writers every available moment he/she comes out of their cave. Every great writer has a contemporary he/she shared ideas, drinks, and laughs with, I believe. It helps the author to truly evolve and create circles that are bound in success.

Novel Synopsis:
SPRING BREAK GETS WILD ON THE LIVELIEST CRUISE IN THE PACIFIC UNTIL THE UNDEAD CRASH THE PARTY.
Eighteen-year-old Sylva Fleischer and her friends raise the dead for a living for police investigations and mourning families. Two years after her high school crush, a hot guy named Brandon, is assumed dead, Sylva’s friends convince her to go on a spring break cruise in an effort to suppress her depression over him. But when passengers mysteriously die and reanimate into flesheating zombies like she’s never seen before, Sylva plunges into a horrifying struggle between a ship infested with the undead and the scariest thing of all: a second chance with Brandon after she discovers he’s still alive. This is a zombie story that eats right to the core and leaves you licking your chops for more.
Got zombies? Sylva Slasher does...
“[Ace] wastes no time immersing us in full, gore-spattered, Technicolor horror… The tension is almost unbearable…” – Leslie Ann Moore, author of Griffin’s Daughter. 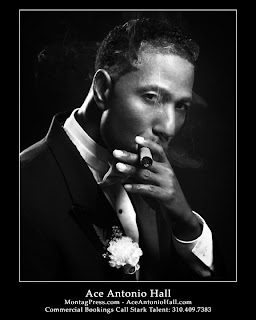 Soon after being cast as the lead in the senior class play, Ace Antonio Hall got the acting bug and earned a BFA from Long Island University, New York with a concentration on acting and screenwriting. Inspired by his father, Chris Acemandese Hall, who penned the lyrics to the jazz classic, "So What," sung by Eddie Jefferson, and his sister, Carol Lynn Brown, who guest starred in the 1970's film, "Velvet Smooth," Ace was torn between choosing a career in music or film.

He was the Vice President of the Greater Los Angeles Writers Society (2009-2011), and continues to head the Science Fiction, Fantasy & Horror (ScHoFan) Critique Group as Co-Director of critique groups within the society. He is also a member of LASFS and the International Thriller Writers. Ace's true labor of love is writing Zombie Horror with character-driven plots featuring female protagonists and he continues to write short  stories and build on the world of Sylva Slasher.

Please visit Ace's website everyday for “Sylva Strips,” which are brief excerpts of the novel on www.aceantoniohall.com.
Posted by madeline40 at 6:00 AM No comments: