I'm always pleased when WOW - Women on Writing asks me to participate in one of their new author blog tours. WOW hosted my first blog tour, and I have made many lasting friends as a result. Plus I'm a huge advocate of virtual book tours as a way of promoting our books.

My guest today is Jennifer Richardson, author of Americashire: A Field Guide to a Marriage (She Writes Press, May 2013) who discusses her decision to live a child-free life. This topic is particularly of interest to me because my son and his wife recently made that decision as well. 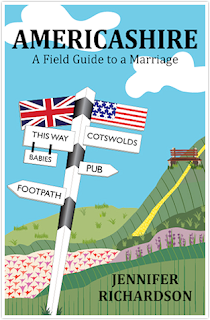 
Living a Childfree Life: The Oprah Problem and Other Myths

I already know what you’re thinking. You’re about to read something fabulous and envy-inducing. Because surely, since I chose not to have kids, I must be living the life exotic AND making a difference along the way. It’s not your fault for thinking this; that blame lies directly with Oprah.

While the childfree life has become quite stylish with celebrities today–everyone from Rachel Ray to Ellen and Portia to John Hamm and his girlfriend, Jennifer Westfeldt, are doing it–the flagship celebrity for the childfree cause is Oprah. And this is a problem because the woman is such a damn overachiever. It would be one thing if I could quietly rock the corporate life mediocre and write a bit in my spare time. But no–thanks to Oprah, I am expected to own my own television network, publish a magazine with my picture on the cover every month, and educate all the girls in South Africa. Anything less and I am failing to live up to the career superwoman assumptions that have been mistakenly bestowed up on me as a childfree woman.  (My sincere apologies to all my exhausted, discriminated against, working-mother friends. I know I am supposed to be smashing glass ceilings on your behalf, and I do really feel bad about this when I use my middle manager paycheck to buy a second glass of wine.)

Hang on to your seat because, now that I have busted the first myth about childfree women being career powerhouses, there’s more to debunk. Let’s start with the polite but misplaced belief that my marriage must be awesome because my husband and I have so much time to focus on each other. Au contraire, my naïve mother-friend. In fact, sometimes I think it was a mistake that my husband and I didn’t have kids, primarily because we don’t get the benefit of having that distraction for eighteen years or so. There are no exhausting efforts getting a little one to eat or sleep, or, later, crazed schedules chauffeuring them around to school and soccer and ballet.

In the absence of such demands, you actually have to make conversation with your spouse.  Like every day.  And because my husband is the one between us who’s in touch with a feminine side, his favorite insult to throw at me in a fight is that we don’t have anything to talk about anymore.  My instinctual reaction to this is, “What on earth do you expect after eleven years of marriage?  What, exactly, is the quality level of conversation you require during every single breakfast and every single dinner of every single day?” The irony is that, of late, our go-to topic of conversation is one that is also popular in the homes of parents of young children. This, of course, is poop. I chalk this up to being middle-aged–I certainly don’t remember being so scatological before forty. But now, the morning contents of the toilet bowl, or lack thereof, are a reliable topic of conversation.

I have just one final bubble to burst for all the moms out there, which is you would be full-figured at forty even if you didn’t have that kid. That’s just what happens to our metabolism when we hit middle age. I am embarrassed to tell you that I’ve gained the best part of twenty pounds since I got married. Admittedly, this is also because I get to drink a lot more wine than you do, moms, and that goes straight on the belly. I never had to cut back for a pregnancy, or to breastfeed, or because I might get drunk and drop my infant.  Hell, I wish I could blame my post-marital weight gain on not being able to lose the baby weight.  It’s much more dignified than being an old wino.

So what does all this tell you about the childfree life? Well, for me, choosing not have kids wasn’t a sacrifice I made for something else I wanted to do (be a CEO), have (a “fulfilling” marriage) or be (unnaturally super-hot well into middle age). Lacking sufficient enthusiasm for what is quite possibly the hardest job on earth, it was simply a choice I made. And so here I am, a childfree woman in all my middle manager, scatological, slightly bloated, wine-drinking glory.

Synopsis of Jennifer's book:
When an American woman and her British husband decide to buy a two-hundred-year-old cottage in the heart of the Cotswolds, they’re hoping for an escape from their London lives. Instead, their decision about whether or not to have a child plays out against a backdrop of village fêtes, rural rambles, and a cast of eccentrics clad in corduroy and tweed. 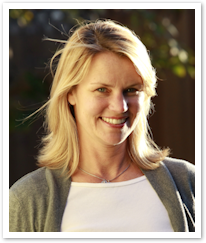 About the Author:
Jennifer Richardson is an American Anglophile who spent three years living in a Cotswold village populated straight out of English central casting by fumbling aristocrats, gentlemen farmers, and a village idiot. She is married to an Englishman who, although not the village idiot, provides her with ample writing material. She currently lives in Santa Monica, California along with her husband and her royal wedding tea towel collection.

You can find Jennifer Richardson and her book here:
Americashire: A Field Guide to a Marriage, published by She Writes Press
www.americashire.com I am particularly enamored by her maps and interactive guides to each of four Cotswold walks that she discusses in her book. Click on Book Extras when you get to her home page.


www.pinterest.com/baronessbarren
and her blog: Baroness Barren: Tales of a Child Free Life
Posted by madeline40 at 6:00 AM 3 comments:

My husband Bob and I are married forty-three years today. I'd say it is a miracle considering all the nay sayers at the time we said, "I do." My parents were openly hostile to our getting married since my husband was not our same religion. Don't I look a little up tight at the scene - a judges chamber? 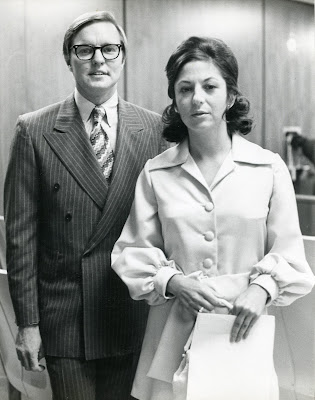 Since we had both been married before, we had a tiny wedding - about ten witnesses at the ceremony and for dinner at a local restaurant afterward. But that didn't matter to us. We were confident about what we were doing. And that has never changed even though we experienced the greatest loss any mother and father can have - the death of a child.

Yet now we still can laugh out loud at all those folks who predicted our marriage would never last.

I wrote the following poem after forty years. It's included in my memoir, Leaving the Hall Light On.

He folds her in his arms
and looks down at her
with his deep blue eyes
and a small, closed-mouth smile
that shows just the hint of dimples
in his ruddy cheeks—
the way he looked
as he stood at her apartment door
on Mentone Avenue
that first night,
his hair
straw-blond, cut short,
stuck straight up,
his beige raincoat
damp from the March drizzle,
carrying a bottle of champagne
under his arm.
He remembers how
after drinking champagne
after dancing so slow they hardly moved,
after she invited him
into her bed,
they were up all night
exploring, tasting as they got to know
and feel every inch of each other,
stroking faces, necks, thighs, feet,
kissing, mouths open,
almost swallowing each other,
coupling, resting,
one on top, then the other,
spooned, joined
over and over again
until dawn and hunger
drove them out into the rain
to find a place to eat.
And though he admits nothing,
no nothing,
has ever come close
to that first night,
his memory of it
and the girl standing in the doorway,
with short dark hair,
a tight-fitting yellow dress,
black patent-leather stiletto pumps,
keep them joined together

Email ThisBlogThis!Share to TwitterShare to FacebookShare to Pinterest
Labels: death of a child, forty years, husband, Leaving the Hall Light On, parents, wedding

Memoir - a way of keeping a loved one alive

Before I had any inkling that I would write my memoir, Leaving the Hall Light On: A Mother’s Memoir of Living withHer Son’s Bipolar and Surviving His Suicide, I wrote to keep the memory of my oldest son Paul alive. It was almost an obsession. I continually wrote down everything I could remember. I didn’t want to forget one thing about him.

It turns out my notes and journal entries were a huge help when I began to put my memoir together. My journals – even short entries – informed and rounded out my writing immensely. What else is memoir but memories?

Here is a list of memories I wrote down in the early days after Paul’s death. I’m especially glad to have them this month – my birthday month – one of the times I miss him the most.