I'm delighted to host Sonia Marsh, author of Freeways to Flip-Flops, today. I got the opportunity to ask her several questions about her writing and publishing experience.  As you'll read from Sonia's answers, she is a master networker. I have learned an immense amount from her. Plus Sonia is very generous about imparting her wisdom. If you are thinking about self-publishing, and even if you have a publisher, take some tips from Sonia about how to market your book. 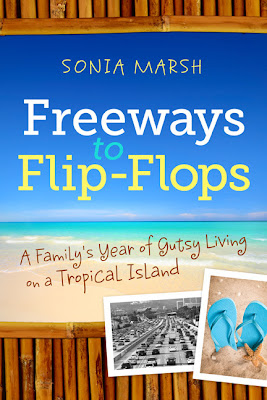 I believe you formed your own publishing company for the release of your book. Why did you decide to do that rather than go the traditional publishing route?

Like most writers. I was hoping to get a traditional publisher; in fact a small traditional publisher loved the premise of my story and kept asking me to show my manuscript. I knew it wasn’t ready, but after her third request, I finally e-mailed it to her. She agreed it needed more work, and a year later, she asked to see it again.

It still wasn’t quite ready, but I let her read it a second time. She then rejected my manuscript and said the story was not what she had hoped for. I was focusing on my son’s defiance, rather than on the adventure of moving to Belize.

With indie-publishing becoming more popular, I finally got the courage to “listen” to the advice I’d received from various agents and editors, and ended up with a story I felt was commercial.

Prior to your book release in September, how did you prepare? What marketing tools did you set up?

I read several books, including: Get Known Before the Book Deal, by Christina Katz, as well as PR and marketing articles online.

I read that it’s important to have short-term and long-term goals and to have a marketing plan, and I tried that, but that’s not the way I work. I’m far more spontaneous, and less organized than most of my author friends. I’m more of a people person, a networker who likes to chat and get to know others.

Several years before my book was ready, I followed a couple of local journalists, and purchased their books at their events. I always told them that I was writing a book and was fortunate that they were interested in my story about chucking it all, and uprooting my family to live in a hut in Belize.

Then I stayed in touch with them, on Facebook, commenting etc. I would ask them for help when my book came out. Would they please review it, or let me know who might be interested in reading it, and interviewing me.

I think I enjoy planting seeds all over the place, and after a while, those seeds sprout and people start contacting me.

What are you doing now to promote your book?

I’m booking as many events as I can at:


I also network weekly with other bloggers, authors, coaches, and women’s groups, and ask them for ideas as to where I can speak.

Tell us a little about your writing life and your decision to write a book about your life in Belize? Did you write while you were there or after you came back to California?

When I first told a couple of close friends that we might move to Belize with our kids, they said, “Wow, Sonia, that’s pretty “gutsy,” you should write a book about that.

I’d never written before, although during high school, I had thought about becoming a journalist. So I started a journal about a year before we left so I could capture all the events, including my kids’ comments, my emotions at the time, and real dialogue to make it read and sound authentic.

When I returned to California, I thought it would be easy to turn my journal into a memoir, and had no clue about structuring a memoir. I never realized how much work it would take, which is probably a good thing, looking back on it.

What kind of support (editing, graphic design, proof reading, etc. ) did you get while creating and publishing your book?

Like many first time writers, I thought my memoir was ready after my first couple of drafts. In fact, I revised the first three chapters about five times, the next ten chapters, about three times, and the remaining 50% of the memoir was still in journal format, when I hired my first editor.

I then realized how much work I still had to do, to create a commercial memoir. The editor did give me one positive piece of news, “You’re a very likable narrator, which is not something you see in many memoirs today.” I thought that was a strange comment, but I was flattered anyway.

After attending several writers’ conferences, classes and critique groups, I rewrote several times and then hired another editor who specializes in story structure. After rewriting several more times, I then hired a copy editor, and finally a proof reader. So that’s four editors in total.

As far as formatting and cover design, I wanted it to look professional, so I did my research and ended up with 1106 Design, that specializes in book design.

What has been the world’s response to your book so far? Are sales going well? Have you gotten good reviews?

I sent out 100 ARC’s (Advance Reader Copies) to bloggers, journalists, potential endorsers, before my book release date and was fortunate to get 33 positive reviews (only one negative) and we all know that one grumpy person who isn’t happy with his/her life. I also managed to get some articles in the local press, and the front cover of the Orange County Register.

I’m not keeping track of sales on a daily basis as I focus more on booking events and spreading the news about my book. Sales will follow. I did receive my first royalty payment from Amazon and I also sell books at my weekly events.

Tell us about your next writing project if you have one.

I am putting together an anthology of the “My Gutsy Story” series on my blog and plan to host an event inviting all those who submitted to attend. I would like to make it special, and have a famous “Gutsy” person attend.

As far as writing another memoir, I’d love to join the Peace Corps, and write about other people and what I experience in Africa. I speak fluent French, and would like to be sent to another third world country and focus on the lives of the locals.

About Sonia: I can definitely attest to Sonia being a gutsy woman. And I relate to her life in Belize since our family lived on a Pacific Island for a year and a half. I'm just sorry I never wrote a book about it. 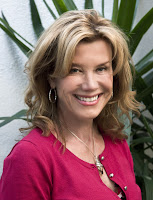 Sonia Marsh is a “Gutsy” woman who can pack her carry-on and move to another country in one day. She’s a motivational speaker who inspires her audiences to get out of their comfort zone and take a risk. She says everyone has a “My Gutsy Story”; some just need a little help to uncover theirs. Her story, told in her travel memoir Freeways to Flip-Flops: A Family’s Year of Gutsy Living on a Tropical Island, is about chucking it all and uprooting her family to reconnect on an island in Belize.

Sonia has lived in many countries – Denmark, Nigeria, France, England, the U.S. and Belize – Sonia Marsh considers herself a citizen of the world. She holds a degree in environmental science from the University of East Anglia, U.K., and now lives in Southern California with her husband, Duke.

Greetings from Paris. I loved your questions, and hope that some of my marketing tips may interest others. Thanks. I shall post photos from WHSmith Paris. Come see them on my FB album at Gutsy Living.
Thanks Madeline for helping other authors.

Such great advice. Sonia has taught me so much about marketing and perseverance.

This is a great interview, Madeline and Sonia. I especially liked your marketing tip about"planting the seeds all over and watching them sprout", Sonia. You are living proof that persistence pays off. I appreciate your openness in sharing all your lessons learned. Thank you!

Jason, It's mutual. Your Indie Authors Hangout has sparked a fire in most of us to try our own Google Hangout interviews during our blog tours, and more. Look at Kathy Pooler and her 3-year anniversary of her blog. Without your guidance, we wouldn't know how to do our own interviews. I think we all need to meet sometime in the real world.

I apologize for such a late response. I've taken a short-term consulting job that's keeping me away from here and my social networks. But I'll be back in full swing by mid January.
I appreciate having you here, Sonia. Your tips will definitely interest others.
Jason, so glad to see you here on Choices. I look forward to another hangout.
And Kathy, as always, you are such a support to me and our writing friends. I love that you keep coming back.
All best, everyone. Have a great day xo

Sonia, I'm encouraged to hear that you are a spontaneous marketer, and not given to the massive planning and organization the pro's advise, and yet you are doing well with your book. I'm also not much on planning. I can tell other people how to do it, but it absolutely isn't my style!

Hi, Sharon, Thanks for being here. I think we all have our own styles of writing, marketing, and everything else we do in life. I love that Sonia and you like to be spontaneous. I think my years of working in the corporate world and under strict deadlines trained me the other way. Perhaps you and Sonia will teach me a lesson that spontaneity works just as well as heavy organization.

Kathy, Madeline is right. You are a huge support to all, and if anyone is "planting seeds" all over, it's you. our kindness shines through. Thanks.

I agree with you. We all have our own way, and as a non-conformist, I get tired of reading about the "right" and the "wrong" way of doing things. I think there are two reasons for this:
1). What might be considered the right way in the U.S., might be wrong in Europe or Asia.
2). We are made to FEAR that we're doing things wrong, and we accept that the other person is an expert and we need to follow them, (usually for a FEE.) Do you see where I'm going with this?
I'm not saying we can't learn from others, but I also think we know what's best for our own personality, and we also need to "lighten-up" as it's not the end of the world if we make a mistake.

You are right on, Sonia. Thanks again for being here. Have a great time in London. Hope to see you soon. xo