Four days ago a 20-year old man took his mother’s assault weapons, killed her, and then went to a local school and killed twenty children, ages 6 and 7, and six adults before he killed himself. 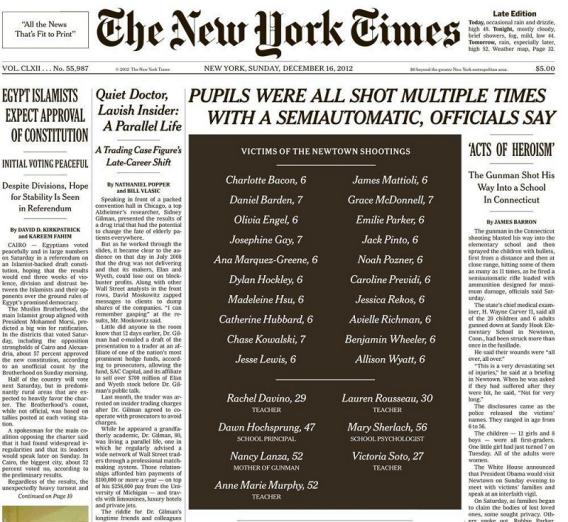 So much has come up for me since then – besides the tears. The senselessness of it, the grief of parents losing a child, the struggle of young children to get their arms around such a profound loss. Our whole country and probably the world are in mourning now, and we are all at a loss about what we can do. Right now all I can do is think and cry about it.

However, as I watched Bob Schieffer’s morning talk show yesterday while I was working out, two things came up for me – aside from the enormity of the numbers of guns bought and sold in our country and the senseless numbers of gun murders – over 32,000 a year. It is totally clear that we have the right to bear arms. There is no way we’ll be able to remove guns from our country. That said, can’t there be a better way to control them. The people on Schieffer’s show said it is harder to get a driver’s license than it is to buy a gun. Of course in the case of this shooter, he didn’t buy a gun. He used his mother’s.

They also brought up the success of Mothers Against Drunk Drivers – started by a mother of a victim of drunk driving in 1980. MADD changed the whole paradigm of drinking and driving.

Well, couldn’t we come up with an organization called something like Mothers for Gun Better Control and go on a campaign to better check out the people who buy guns? I keep hearing about the need for the mental health professionals to get involved in identifying violent mentally ill people. Then perhaps we could institute laws that would preclude those identified from buying guns. Of course that brings up all kinds of right of privacy issues. Believe me, I have no idea how any of this could or would work.

Also, the idea of lumping the words mentally ill and violent together ruffles my feathers. I know they are in movies and television. However, in my experience with my son who was mentally ill, that was not the case. He was always a gentle and caring person. The only violence he did was to himself when he took his life as a result of his bipolar disorder. And his weapon of choice was not a gun. And as hard as it to say, I am thankful for that. So I would hope we don’t think that all mentally ill people are violent. Otherwise, how would we ever be able to erase the stigma?

I know we are a long way from coming up with an action plan. Now we are grieving and mourning with the parents, siblings, and other family and friends of those who died so horrifically. I know from the experience of losing my son how difficult a time this is for all of them. Yet, I’ll never know the extent of their grief. How can they ever understand why this could happen to them, to their family, to their school, to their community? It is unfathomable.

I also relate to the possible posttraumatic stress that the surviving children might feel as a result of losing their siblings and school friends. When I was nine my favorite uncle was killed in a plane crash. I had just seen him the day before. I couldn’t understand it. I couldn’t believe it. I kept thinking he’d come back. And I didn’t stop thinking those thoughts for years. What does a six, seven, or nine, ten year old know about the finality of death? That is also unfathomable.

In the meantime, my thoughts, my heart, my tears are with all those who suffered this horrific loss in Newtown CT.

Good post. I agree that we can't do away with all guns. However, no one needs an assault rifle of any kind. If we limit the number of rounds that can be purchased it would at least delay the gunman and those teachers who valiantly tried to stop him may have been spared while he was re-loading. My thoughts are that assault rifles should be banned.
Ann

Dear Ann, thanks for your thoughts. I totally agree with you. Let's see what our president and vice president will accomplish toward that end. Thanks for responding.