Shooting a video is hard work 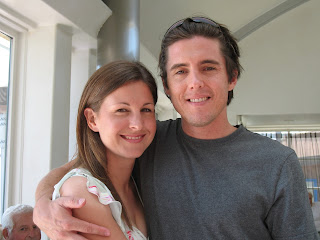 The producer and director
I’m checking things off my list of to dos. One of the things that’s been on that list for months has been to make a three-minute video to post on Marla Miller’s Women Over 45: Speak website - another tool for marketing my memoir, Leaving the Hall Light On. And with the help of my son, Ben, and daughter in law, Marissa, we finally filmed it. They are the producer and director.
I wrote the script some weeks ago and spent quite a bit of time tweaking and going over it. The morning of the shoot I read through my lines a few times while I was on the elliptical at the gym. I made a few changes when I got home, and after I showered and dressed and did my hair and makeup, I started going over it again.
Ben and Marissa had suggested I break the piece up in parts and that was brilliant, because not being used to memorizing anything, I needed the breaks. Speaking for three minutes straight would have been daunting and probably boring. Filming the speech in several parts helped me follow their direction to sound normal and not like I had memorized a script.
I paced up and down the long hall outside my office and talked through the script a few times out loud just before they arrived, and of course I tried to memorize the whole thing. And then my preparation time was over. Ben and Marissa arrived with cameras, lighting, and even a little lavaliere microphone that hooked onto my shirt.
By the way, I wore gray cords, a white V-neck long-sleeved t-shirt and a red satiny blouse over it. For some reason Marissa had a premonition that I would wear red. I wondered why she would think that since I almost always were gray, white and black. Well, perhaps she had a special bond to me that morning. Yes, for sure that’s true.
Once my office was ready for the shoot, Marissa started asking me questions relative to each part in my script. Her finishing the question was my queue to start talking.
I think I had to go over every section two or three times, and one section we had to go back to at the end because I just couldn’t get it right. But, finally after about forty-five minutes of stops and stars and go-overs, we finished with the talking part.
Then they took shots of me working at my computer, sitting on my window seat and writing in a notebook, sitting on my window seat meditating, and finally walking around my yard looking at the plants or patting the Buddha or sticking my fingers in the water fountain.
My next chore is to pick out a piece of Paul’s music that isn’t longer than three minutes to use for background. But just getting this video work to this point is a big relief. And with Ben and Marissa’s help, I know it will turn out just great – perfect, in fact.
So stay tuned. I’ll post it here as soon as it’s finished.
Posted by madeline40 at 12:32 PM