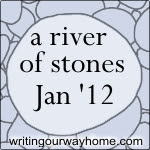 January 22
Dark gray clouds cover the roaring waves. I wonder why the surfers aren't riding them instead of taking them them one by one lying down.
January 23
Kristi's photo was posted on Putting a Face on Suicide today. She was just 19 when she took her life. I wish I could share her huge eyes, her smooth skin, her friendly closed-mouth smile with you. She was beauty. And even that couldn't save her from a drug addiction that sucked the life out of her.
January 24
I met an old friend this morning and within five minutes of talking she was in tears. She told me about her mentally ill daughter in yet another healing institution. She's been in nine since she was thirteen; she is twenty now. I hope my writing will inspire my friend to take good care of herself. Her daughter will have to find her own way.
January 25
I was so proud of myself last evening for being an advocate in getting a mentally ill young man some help. I was told at ten in the evening that he would be in good hands and not to worry. But this morning the news is that he is still in harm's way, in a jail cell naked wrapped in a quilt and not eating and drinking, and I don't know what else I can do about it. I have never felt so frustrated. Unfortunately this story is bringing back bad memories of my son's behavior and how he was treated during his bipolar days.
January 26
Every time I am in Pilates class I hear Jeffery's mantra: shoulders in your back pockets, slight curve in the small of your back, sway your heel out just a bit, feel yourself getting taller with each breath. And you know what? At that moment, I do feel myself getting taller. But in the end, I'm still as short as I ever was. Pilates is a great stretch and mobility and agility exercise, but it's not going to make this vertically challenged person grow.
January 27
Every day I wake up stiff and slow, yet move with vigor again by the end of my morning workout. Then after five or six hours at my computer, my old lady stiffness returns. Ginger's massage helped yesterday. I wish I could afford one everyday.
January 28
I walk through the women's surrealistic art exhibit and stop in awe in front of the wedding portrait of Frieda Khalo and Diego Rivera. She made him seem a giant next to her. Yet she was a giant among the women artists of her time. This was a woman who died much too soon.
January 29
I watched a video called "Get in Line (Behind Tricia)" while sitting at the bar at LACMA. The action by seventeen dancers dressed in dirty white hoody robes was slow. They maneuvered long wooden poles into triangular, rectangular, and square configurations over and over again. When they finished, they set the poles down on the wooden floor, took off their robes, and walked in a line dressed in tangerine-colored togas. I'm lucky that I didn't have to see all eight hours of it.
January 30
There she is again with another pair of workout shoes. Today they are dark gray with a red Nike swish, red laces, and white soles. This pair perfectly accentuates her little workout short-shorts in an abstract print of blacks, lime greens and reds. This woman's closet must have more shoes than Imelda Marcos'. I've seen her in a dozen pairs of workout shoes at least.
January 31
In celebration of my husband's success, I had some sips of wine last night after a 30-day hiatus. It was a nice red Syrah. It felt smooth and dry going down, but as usual, it didn't give me a buzz.
Writing Your Way Home
A River of Stones
Posted by madeline40 at 1:57 PM

I couldn't help but think how full our lives are Madeline. How much you did in such a short period of time. I can only imagine the amount of thinking/pondering which took place during this time. I felt a real sense of 'calm' in your words. I need to give Pilates a go and the massage is well overdue. Looking forward to what February has on offer. Jeff.

Thanks, Jeff. Please get that massage. It is so well worth it. All best, Madeline