Happy anniversary to us! 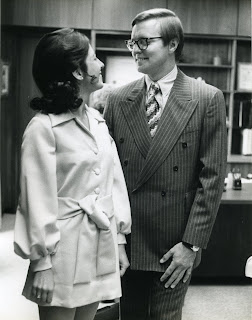 Today we are married 39 years. And, I remember that day 39 years ago like it was yesterday. In the morning my sister and I picked up mom and dad in Long Beach as they disembarked from a cruise and brought them home. Then I went to get my hair done. My hair was about as long in those days as it is now. But then it was mostly dark brown, not mostly gray.

And then we went to the Beverly Hills court house for a little private ceremony. Mom and Dad signed the license as witnesses and my cousin, with her gambler former husband, was the photographer. Bob's old college friend with his ex-wife were there. And my 21-year old sister. That was it. No other friends, no other family.

After the ceremony we went back to mom and dad’s and had champagne and talked to my brother. Even though my mom and dad weren't happy with my choice of mate, he said he couldn't ask for a better man for me. But, then he and Bob always got along. They called each other boyfriends.

We had a wedding dinner at a now defunct restaurant on Beverly Drive. Dad wanted to pay, but Bob insisted. Because my parents were so resistant to our getting married, we didn’t want to be beholden to them. We never had another party or a shower. We just got married. We had made up our minds three weeks before, bought a diamond ring and wedding band for me and set the date. I also quickly found the perfect dress for my second marriage -- a cream colored silk, shirtwaist style with a wide sash. When I look back at those old photos of us repeating our vows I wonder what I was thinking. The dress was so short the shirt practically skimmed my pantie line. But, hey, that was the style back in 1970.

I tried to find a rabbi who would marry us, but didn’t have luck with that, since Bob isn't Jewish. If we were marrying today, I probably would have been succesful. But, I was okay with a Jewish judge. That worked for me.

So, against the odds, we made it all the way to here -- who needs a rabbi, a party, and the approval of doubting parents to make a marriage work? 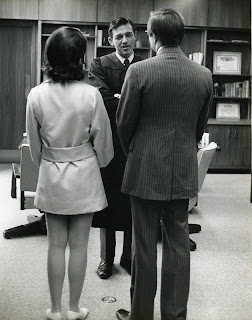 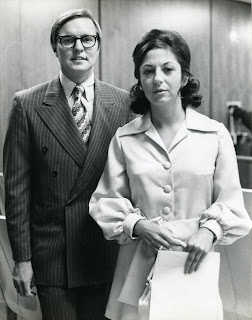