After a plane ride, a long drive in a car with a young and sophisticated woman at the wheel, careful and thorough customs checks when leaving Kenya and later arriving in Tanzania, and another plane ride, we arrived in the Serengeti. It turns out the Serengeti is located just a couple hours drive from where we were in the Masai Mara, but because of some kind of feud between the Kenyan and Tanzanian governments the nearby border was closed causing us to unnecessarily spend hours and the big bucks to get to our first Tanzanian destination. 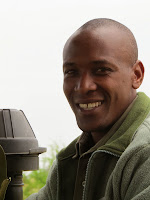 However, all was forgiven when our guide Nathan met us at the airport. Throughout our three-day stay there, he took us on what I thought were the most interesting game drives of our entire time in Africa – imagine seeing a mother and baby rhino before we even arrived at our next tent camp, the Olakira.

On that first drive we also saw two kinds of vultures, storks, hippos, elephants, and Masai giraffes. But the rhinos were the find of the day – perhaps even of the whole trip. Even Nathan hadn’t seen any rhinos in months. 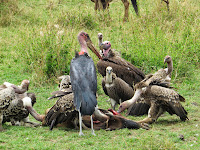 The Olakira camp is much more traditional – without the elegant appointments of the Elephant Pepper camp. However, it does have running water into the sink making it much easier to wash out undies, a curtain separating the bath from the bedroom, and a large screened in living room outside of the bedroom. The food, however, was way worse. 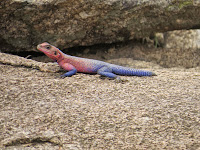 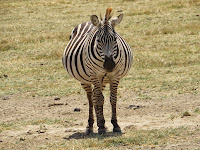 As we traveled around the Serengeti with Nathan for three days, we began to call him a tracking genius. We saw leopards, lions, the Agama lizard that looks like Spiderman, many more kinds of antelopes, a very pregnant zebra, and more gorgeous birds including the woodland kingfisher, the lilac breasted roller, the gray heron, the yellow throated long claw, the gray headed social weaver, the little bee eater, and the marabou stork. 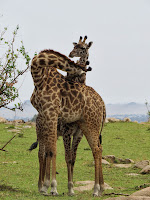 Nathan also taught us some more Swahili words (Swahili is the language of Tanzania whereas the Kenyans speak English). “Twende” means let’s go and “Semama” means stop. Also “Pole-pole” means slowly, slowly. We used those words a lot while we were driving around. He also had his own language for asking us if we needed to stop to pee. “Do you need to “Pick a flower?” he’d ask ,and if we did he’d find us a suitable bush to hide behind. 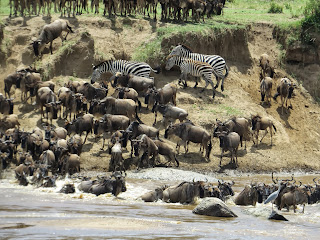 The most exciting part of our Serengeti stay – aside from the rhino sightings – was watching the wildebeest and zebra cross the Mara River from the Kenya side to where we were in Tanzania - called the Migration. Nathan was intent. He took us back to the crossing point several times and finally when we were about to give it up we saw another game driver racing a ways up on the road we were on. Nathan followed at about 60 mph with the four of us in an open land rover without seat belts. But it was worth it. We got there just in time to see the wildebeests and a few zebras – about 500 animals in all – cross. It was like a stampede. Some were on each other’s backs. They filed down the cliff on the Kenya side, got into the water, swam, climbed over rocks, swam some more until they got to our side, and climbed out. A couple had trouble. One made it and was the last one out. The other appeared to be stuck between two rocks and couldn’t figure out how to back up to get out. Instead it kept struggling until exhausted. The croc hovering nearby never attacked. It just waited patiently for the wildebeest to die on its own. It was so sad to watch that we left before the croc got its dinner. 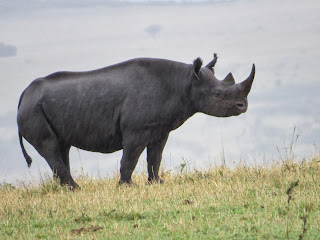 That afternoon, on our ride with Nathan, he miraculously found us another rhino. Out of only forty-five rhinos in the whole area, we were lucky to see three of them. And then it absolutely poured down rain the rest of the day.

Stay tuned for the next installment about Lake Manyara and the Ngorongoro Crater, also in Tanzania.
Posted by madeline40 at 10:28 AM