Since so many people have asked about our trip to Africa, over the next few weeks I'll share some highlights at: Nairobi, Samburu, Masai Mara, Serengeti, Lake Manyara, the Ngorongoro crater, then back to Nairobi. 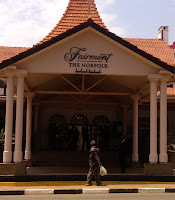 We arrived at the Nairobi airport at 2 am. The place was practically deserted and that was good, since the main terminal’s welcoming hall, destroyed by a fire two weeks earlier, was nothing more than a large tent. We got our luggage quickly and met our tour group driver, Martin, outside. Since it was so early in the morning Martin said we should have no traffic, and we’d be at our hotel – the Norfolk – in about ten minutes.

By the way, I keep wondering if the airport fire was a warning from the terrorists who attacked the mall in Nairobi several weeks later. But we'll never know about that for sure, will we?

And then almost right after we left the airport we passed a horrific accident. The car involved looked like it went through a mangler, and we learned later that someone died. With police and rescue vehicles lining the road, it took us more than ten minutes just to get around them. Then about a minute later I heard a large noise like we had run over something big and metal. It turned out the car passing us on the left – illegal with right-hand driving rules – clipped the front of our van. The car stopped, five drunken guys named “Vinny” got out and started arguing. Then they took off. Martin with us in the back seat raced after them, made them stop, and they all got out of their car again. I was scared. I really thought they were going to fight with Martin and we would end up being stranded on the road with no way to communicate with anyone. Thankfully, though they were drunk, they were not violent.

Even Bob wanted to get out of the car to see if he could speed things up, but I wouldn’t let him. What could he do? He probably couldn’t even communicate with them. Finally Martin got the information he needed and returned to the van, and we were finally on our way to our hotel. All told, it took us over an hour to get there. After a long plane ride from London, on the very uncomfortable Turkish Airlines, and our adventurous ride from the airport, I was ready to collapse. 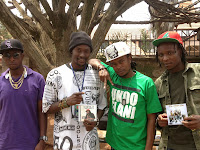 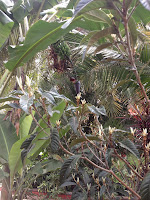 Of course I felt much better in the morning. I got up early, went to the gym, and walked through our hotel’s beautiful grounds overflowing with flowering plants. After breakfast in the outdoor restaurant we ventured out just a little, following the music. Singers and dancers were entertaining across the street at the National Theatre. We also spoke to four young men selling their new CD, which I bought for $3 American. 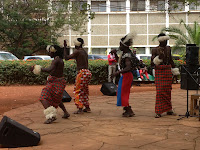 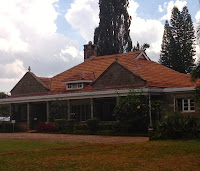 We had a four-hour tour scheduled for the afternoon with our two traveling companions, again with Martin driving. However, the Nairobi traffic was so horrendous – many times worse than the Los Angeles freeways – that we only made it to two places: The Karen Blixen museum and grounds  – so much like I remember from the movie “Out of Africa” – where a museum docent gave us a private tour, and then we went on to the Nairobi cultural center to do a little shopping.


That night after eating at the hotel, we prepared our bags. We left two bags with clothes for the France part of our trip at the hotel to store and stuffed our small duffle bags with our safari clothes. We were told to pack light – no more than thirty-three pounds – and we did. Unfortunately I took the instructions much too literally. I could have added a couple more pairs of slacks and a lightweight sweater or two and no one would have complained. 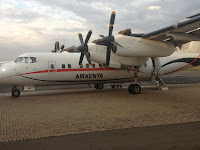 The four of us left for the airport early the next morning to take our first tiny plane ride to our first safari stop in Kenya, Samburu.

The next installment is about Samburu.
Posted by madeline40 at 1:54 PM