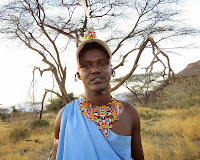 We left our Nairobi hotel bright and early on Sunday morning, September 2, and flew via Air Kenya to our first safari stop, Samburu, Kenya. The flight was approximately one and one-quarter hours, and every seat in the twin-engine plane was full. We landed in Samburu on a dirt runway and as soon as we deplaned we met our guide, Bon-i. Take a look. No words could describe his wonderful African costume and beaded accessories.


Almost immediately he piled Bob and me and our traveling companions, Joel and Susan, and our duffle bags, various backpacks, jackets, hats, scarves, and camera equipment into his open-sided four-wheel drive vehicle, and we set out on our first game drive. 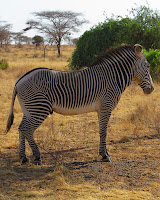 Bon-i, who is very knowledgeable about the game and birds and landscape of the Samburu reserve, told us right away his goal for us was to see the Samburu special five: Grevy’s zebra (a larger animal with narrower stripes than the plain zebra), Somali ostrich, reticulated giraffe, gerenuk, and the beisa oryx. Of course he promised we’d see other wonderful animals and birds as well.

While he drove – with the driver’s seat on the right – he looked on the ground for footprints and dung deposits, and he talked on his car radio communication system to other guides in the area about the whereabouts of the animals. Even though I was bumping around a bit, I was just happy to be there. Any animals out in this vast reserve of grasslands, rugged and rocky hills and plains would thrill me to no end. As we drove we started to peel off our jackets and sweaters. Samburu was the hottest of the five areas in Africa we visited.

First, Bon-i taught us a few necessary words in Swahili (which has forty-two different dialects). Pretty soon we could say, “jambo” for hello, “asante sana” for thank you very much, and “karibu” for you’re welcome with the best of them. One of our favorites that we said over and over is “hakuna matata,” meaning no worries, a phrase made popular in the musical, “The Lion King.” 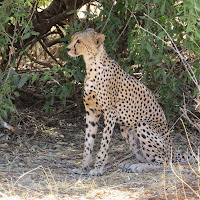 We spent three hours on this first drive – all in the direction of our lodge, Saruni. Here’s a short list of what we saw: a bustard, many Kirk’s dik-dik (one of the many kinds of antelope in Africa), black face monkey, crocodiles, Grevy’s zebra, female and male reticulated giraffes, guinea fowls, Grater kudu, a cheetah, the secretary bird, gerenuk, oryx, and a white leopard. Bon-i also pointed out huge ant farms, termite mounds (some dormant and some not), the turquoise bark of the juniper tree, the many acacia trees with huge hanging African weaver bird’s nests, and the many dry river beds in the area.

As promised we arrived at Saruni in time for lunch – about 1:30 – and we received the royal safari welcome: a line up of the staff in native costumes, a cold cloth, and a cold mixed drink of tea and juices.

Saruni, though not a tent camp, looks like it belongs to the land. Built on a hill we trekked up many steps to get to our suite. The four of us shared a living room, and each couple had a separate bedroom and bath with an outdoor shower. Did that feel good after our hot drive. Plus the view while showering was spectacular.

And I must say the food at Saruni was the best of all places for me. I was especially impressed with the Saruni staff, most notably Benson and Kennedy (who asked us lots of questions about American politics). Very mindful of my restrictive diet of no dairy, no gluten, and no red meat, they always served me something delicious and healthful. 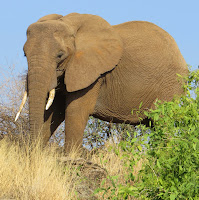 We rested after lunch and went on another game drive late in the afternoon. This time we didn’t see as much: the skink lizard, cinnamon bee eater, and the augur buzzard, but Bon-i had the makings of nice little happy hour libations that we shared in the bush. 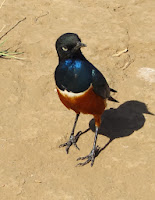 The next morning we left on our game drive before breakfast – Bon-i planned a picnic for us – and we really got into the thick of it. We saw the tiny bush babies up in a tree, more oryx (antelope), the red-billed horn bill, our first sightings of elephants, impalas, more Grevy’s zebra, mongoose, standing gerenuk, an olive baboon family, the Somali ostrich, Grant’s gazelle, and five more reticulated giraffes. While we ate breakfast on the banks of the Ewaso Ngiro (brown) river, we saw marabou and the absolutely superb starling.

On our way back to the lodge we asked Bon-i if it was possible to buy artifacts from the natives rather than the shop there. He called ahead and took us to a little airport area not too far from our lodge where several women in full regalia set up shop – really just stands made out of rickety wood. I bought colorfully beaded necklaces and bracelets – all for gifts to our great nieces – and Bob bought four beaded coasters. The woman who sold me my artifacts gave me a little bracelet, and we took a photo together. 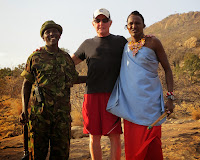 The second day we deviated from an evening game drive. While Joel and Susan rested, Bob and I took a late afternoon guided walk to the Water Dam – about an hour’s trek up and downhill from the lodge. Bon-i was with us, and much to our surprise he brought along a ranger, dressed like a soldier who carried an automatic rifle. I guess those guys are serious about keeping the tourists safe. That was also evident in the evenings after dark. We always had a guide to walk us from our rooms back and forth to dinner, and that guide carried a flashlight and a spear.

We stayed at Saruni for two nights, and ate lunches and dinners with other guests at the lodge. This kind of gathering, sitting at long tables together, was a highlight of our safari experience. It was always nice to meet people from other parts of the world. Everyone told their favorite safari stories and shared about their animal sightings of the day.

And, thanks to Bon-i we saw each of the Samburu special five, and much, much more. Our next goal, however, was to see lions and rhinos. We'd see them at our next safari stop, Bon-i predicted.

The next installment is about Masai Mara and the Elephant Pepper tent camp.