After our two nights in Samburu, we flew to the Masai Mara region in the southeast corner of Kenya. Here at 6000 feet altitude, the weather was cool. And each night while there we experienced enormous rains, such that our guide Simon insisted on rolling up the sides of our jeep and giving us ponchos to wear. 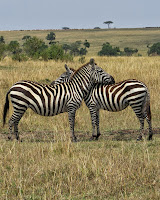 However, the animal and bird sightings there were spectacular. Even in the air before we landed we saw wildebeest, zebras, and giraffes below  - though in Masai Mara the giraffes, instead of being reticulated with patches of color outlined in white, are spotted. The zebras, the common Burchel, are smaller with wider spaced stripes than the Grevy's (my favorite because of the swirly look). Every zebra has unique stripe formations. 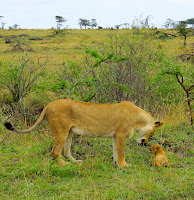 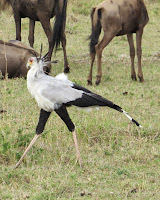 Simon picked us up at the airport and was our guide during our stay. He also took us on a game drive as soon as we landed over a landscape called the Savanna – large plains with sporadic trees, mostly Acacia. And almost immediately he showed us lions – many lions – in families of thirty or more or just a few at a time. We also saw (to name a few) families of hippos in the Mara river and sleeping on the river bank, crocodiles, an attack by two cheetahs foiled by a horde of wildebeests, male water buffaloes with huge white horns that remind me of the wigs worn at the British Parliament, olive baboons, male and female ostriches, eagles, rollers, secretary birds, and the graceful gazelles (FYI, the Grant’s gazelle has a patch of white above its tail, the Thompson’s patch is underneath the tail.)

One of the reasons we traveled in late August and September was to witness the great migration of wildebeest and zebra across the Mara River. So we spent most of our last day at the Masai Mara waiting around the banks of the river for this great event. We did see a few zebra cross – a crocodile tried to take a bite out of one’s hoof, but the zebra managed to get away and complete the cross. This was not, however, the migration of thousands we had been told about. Those hordes of wildebeests and zebras stayed on the shore looking like they were having a meeting about when, where, and if they should go. Here’s a little poem I wrote about it:

Migration
Zebra and wildebeest
march toward the Mara River.
It’s time to cross
from one side to the other
as they do every six months
in their quest for more water.
They come in droves.
hundreds of them in long straight lines.
And as they get to water’s edge
they stop, look.
A few take the chance
and swim to the other side,
outracing the waiting crocodiles.
The others discuss
in shriek-y honks about when
and at which point to go.
Even though they don’t speak
the same language
heads nod in agreement
as they walk en masse in one direction
then to the other,
deciding which is the safest spot
to outwit crocs awaiting their prey.
A few zebras,
the nominal leaders,
step toward water’s edge.
They turn, they walk back and forth,
back and forth, and the others follow.
They return to starting point one.
to wait out the crocs again.

Another adventure was a visit to the Masai Mara Cultural Center. This was pure entertainment, for a $20 fee each. The native adults and children performed for us, showed us a typical mud hut with a fire actually burning in the kitchen area, and we saw how they build a fire with a block of wood and a stick They also gave us a huge opportunity to buy their beautifully carved and beaded handicrafts. But, alas, Our tent camp manager, Patrick, said most natives don’t live like that anymore, that this center is really just for show, like a museum.

For our three days and nights at the Masai Mara we stayed at the Elephant Pepper tent camp. I would call that experience living in primitive elegance. Upon arrival Patrick warned us about keeping our tents zipped up at all times and any prescriptions and vitamins secured in our luggage or else the monkeys would steal our clothing and eat our pills. He also taught us how to take a shower to conserve water: turn the water on as soon as a staff member standing behind the tent calls out that the shower is ready, get wet, turn the shower off, lather up, and then turn the water on again to rinse off. 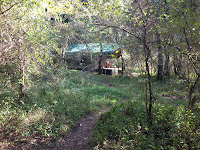 The tents at Elephant Pepper are beautifully appointed with fine wood furniture and bathroom counter tops, fine metal sinks and water pitchers – one for hot and one for cold, but for me it was hard to get used to no water coming out of a faucet in the sink and only so much warm water as allotted coming out of the shower head. Plus, we had very low lighting and no heat at night, but thankfully blankets galore. Again dining together with all the tent guests was a high point of camp life with a long table set in a way that would make Martha Stewart proud. Elephant Pepper camp also had a very homey feel. Patrick, his wife Sophie, and their baby Alexi made it so.

(By the way, in case you’re wondering about Wi-Fi and electronics), Elephant Pepper had Wi-Fi sporadically in the dining and lobby tents, and Patrick took care of charging our equipment every night in his office. However, though we had charging capabilities at the other tent camps we stayed at, we were without Wi-Fi for about a week during our Africa tour. That turned out not to be so bad.)