Just about a year ago – on Mother’s Day and near my last birthday  – I achieved a huge goal. My memoir, Leaving the Hall Light On, A Mother’s Memoir of Living with her Son’s Bipolar Disorder and Surviving His Suicide, was published. In it I tell the steps I took in living with the loss of my son. First and foremost I chose to live and take care of myself as a woman, wife, mother, writer. 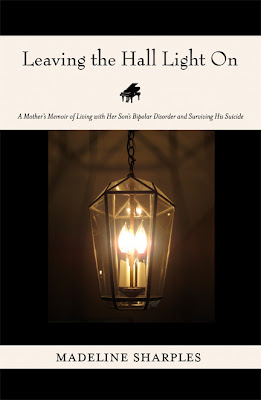 In hopes that my story will inspire others to find ways to survive their own tragic experiences, I’ve devoted most of this last year marketing my book. I have become increasingly more engaged in social networking, through Facebook, Twitter, LinkedIn, and Pinterest, I had a blog tour through Women on Writing (WOW), radio interviews, and many speaking and book signing engagements.
I’ve also embarked on a whole new writing career – writing for the Huffington Post That’s Fit and Healthy Living columns, the Naturally Savvy website as its over sixty expert, PsychAlive, a website that focuses on suicide prevention, and just recently contributing to Open to Hope, a wonderful site near and dear to me that looks to finding hope after loss.
Since my publisher, Lucky Press, decided to cease doing business this past April 30, marketing my book has become more of a priority for me. But, what has been so encouraging is all the help and suggestions I’ve received from the relations I’ve made through my social networks. I never would have believed how close some of us have become.
Though I suspect that I’ll be involved in making next-step decisions for another couple of months at least – about going the self publishing route or continuing to try to find a traditional publisher to reissue my book – I know I will continue with the mission that has slowing and surely evolved through the years since my son died: erasing the stigma of mental illness and suicide in the hopes of saving lives.
I’ve also had a huge surprise this year. Little did I know that I’d become a published author, poet, and web journalist at this stage in my life. I’ve found that I’m definite proof at age 72 that it is never too late for opportunities to reinvent our lives.
Posted by madeline40 at 8:19 PM

You're an inspiration, in so many ways. Thank you for the mission you're undertaking with such love, devotion, and passion.

Thanks so much, bru. My mission is to save my life as well as the lives of others. xoxo Madeline