LA Times Festival of Books - was it worth it?

I spent most the last couple of days at the LA Times Festival of Books held at the University of Southern California campus. And most of the time I hung at the Greater Los Angeles Writers Society booth. 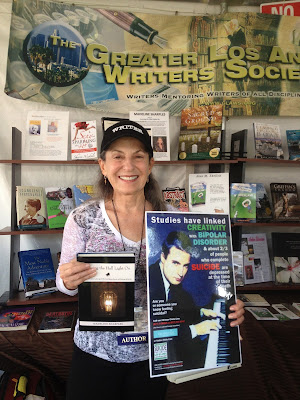 I was pleased to bond with several of the GLAWS members who volunteered to provide hospitality to people interested in joining our group and to help those of us who paid for a selling and signing place at the booth. 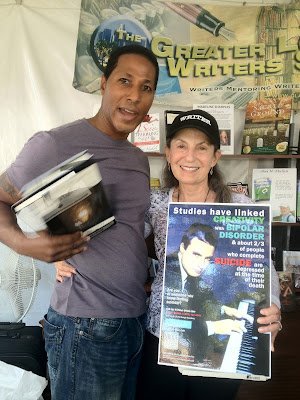 Here I am with author and actor,
Ace Antonio Hall, my GLAWS colleague

I also learned a thing or two about my author colleagues. Most were lovely and friendly but as expected kept to themselves and their customers during our signing sessions. However, the woman next to me used her space as well as mine until I told her next time she needs to pay for two places, not one. She didn’t bat an eye and just leaned over my table space to yet again sign one of her posters for someone. But I won out in the end. My friends in charge arranged for me to have some extra selling time. 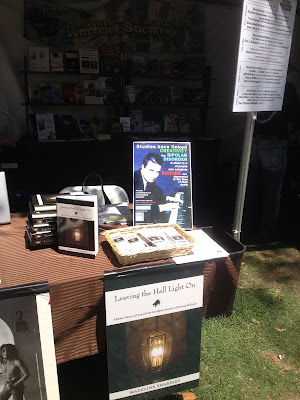 When I came home after my first afternoon at the festival, absolutely exhausted from being on my feet for three straight hours, I made up my mind I wouldn’t pay to be a part of that festival again. It wasn’t worth it. I only sold one book on Saturday.

But I went back on Sunday with a newly enlivened attitude, and before it was even my turn to set my selling space up, I sold a book. Friends who had seen my event invitation on Facebook came and bought—what a great surprise. And once I was up and running, I sold two more books almost immediately. I think my new strategy of asking for the sale worked. When I saw interest, I just asked, “May I sign one of my books for you?” and sure enough both of the women who bought said yes.

Unfortunately the sales ended there, but not the conversations. As always when people find out what my memoir, Leaving the Hall Light On, is about, I hear their personal stories of suicide and mental illness. Or they are therapists and work with people at risk. One man asked me why I thought suicide was so prevalent now. Another told me how selfish it is to do that kind of hurt to one’s family and loved ones. Another asked my credentials. I said: I’m just a mother. I wrote my story. My credentials came from living through my son's bipolar disorder and surviving his suicide death.

So, here are a few book festival lessons learned:

Have I told you, Madeline, how much I enjoy reading the posts on your blog? I commiserated, smiled then chuckled at this one. Of course, I flew there in the spirit of a bird so was not so surprised at the tone of the event much less the outcome :) With the conversations you from those who could relate in some way to your experience, I was reminded of a phrase from The Course in Miracles: 'I am not there for the reason that I think.' Also, I thought of 'seeds.' Did you get that massage?? Hope so :)

Dody, I wish you had been with me to keep reminding me of these things. I love that quote from The Course of Miracles.

I certainly have that message now.

By the way, seeds remind me of development and how networking as I did over the weekend helps spread the word.
xoxo