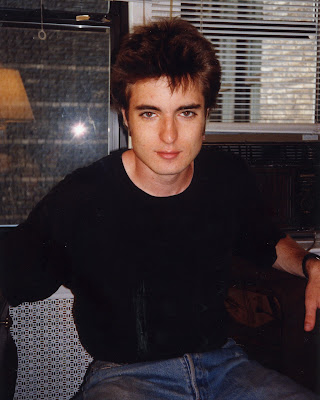 Paul, June 1992, New York City
In June 1992 I went to New York City to visit Paul. We shopped for a bookcase for his new studio apartment that he kept immaculate, we had dinner at a favorite Indian restaurant, and we went to the theater. One day it was so hot that I took a shower at his place before we went to dinner and my first meeting with his new girlfriend. This was the young woman who was his love for the rest of his life.
He was very caring of me during this visit. He stayed with me at the Union Station until it was time for me to board the train for Washington DC where I would also visit my brother and his family. Paul worried about me being in the station alone.
I am so glad we had such a special time together, and that he gave me the opportunity to take his picture. That visit took place nine months before his first manic episode.  After that there were no more opportunities.
Paul’s New York
New York City
Union Square, the lower East side
Paul’s country.
He blossomed there,
he became a musician there
while he learned about the real world
of cold fourth floor walkups,
dealers hustling on street corners
late night gigs, playing for tips in smoky bars
fast walking just to keep warm
and a first grownup love affair
with a girl named, Janet.
I went back there last month.
No, he wasn’t there.
He’s been dead
and gone almost two years now.
The reminders were everywhere.
The square where he first lived as
a freshman at the New School
in the tall skinny brick building.
66 Park Avenue where the Jazz Department
held classes and had practice rooms,
jam sessions,
and young musicians
aspiring for fame.
It was on the marble steps of that building
where he first met Janet
with the long flowing auburn hair
and piercing blue eyes
The love of his life.
No, she was his life.
Beth Israel Hospital
just around the corner.
That’s where they took him
when he first went crazy,
almost ready to graduate
getting gig after gig,
staying up all night,
playing music, drinking Scotch whiskey
hardly eating,
smoking one cigarette after another.
Ah, it was the life
until his musician friend
Bill died of a heroine overdose
and things were never the same again,
Avenue A where he lived after graduation
and recovery from his first break
now teeming with young people
bar hopping
listening to music.
It’s a happening place
made famous by the musical “Rent.”
For me it was filled with old memories
of my boy, Paul
and where his dreams
would never come true.
Posted by madeline40 at 11:19 AM

I am so glad, too, that you had this special time alone with Paul before "everything else" that came. It must feel very bittersweet. Thank you for sharing your cherished, private memories with us. We are the better for it.

Thanks, Janice. Yes, I'll always cherish that few days in New York with Paul. I wonder now why I didn't add that to the book.

I'm glad, Madeline, that you shared this memory of Paul. For some reason, it offered me a sense of balance to my readers-memory of him and his life. Bodhichitta is a buddhist word that I love for it means, "unrequited love." It embodies the bittersweet quality of life and our ever-reaching efforts to arrive at a more solid sense of place. I thought of this term often while reading, LEAVING THE HALL LIGHT ON, which served to nudge my mind towards acceptance.

Doreen, I love that term, Bodhichitta. Thank you for sharing it with me. I think I'm always in the state of looking for acceptance. I am just so glad you read my book.

And thank you, Marion. Those words coming from a memoir guru makes me proud.

Dear Madeline. So many thoughts went through my mind - and not one of them seemed worthy of the type of response your post deserved. I therefore turned to the words of Kahlil Gibran...
'When you are sorrowful look again in your heart, and you shall see that in truth you are weeping for that which has been your delight'. Treasure the memories. Sincerely, Jeff.