Writing down the memories

It was almost an obsession of mine to get my Paul memories written down. I even wrote poems and journal entries about how I went about it. And fortunately I did write them down because a lot of that material ended up in my memoir, Leaving the Hall Light On.


Memory List
I’m making a memory list.
I don’t want to forget my son Paul,
So I’m writing down all the things
I can think of that were unique to him.
I keep grabbing, scratching
my bony claws at the surface of my brain
to remember, to rediscover, to reconnect with
how he looked, what he said,
what he did, how he did it.
I am continually searching for
little mannerisms that were so Paul.
I keep adding to it
I keep going back to it
I keep rereading it
I keep editing it,
so I don’t duplicate what’s already on it.
But, hey, I know a little list
of things he did or said
isn’t going to bring him back to me.
That’s the truth.
You should have seen him.
He walked so fast
like the rest of the New Yorkers.
I had to run to keep up with him.
My dad was like that too.
My dad was so in love with Paul.
I can still see them.
Paul perched on my dad’s lap
gazing into each others eyes
with proud grandpa and grandson
grins on their faces.
Maybe they are up there in heaven
taking long fast walks together.
Probably not, but
I'd like to believe that anyway. 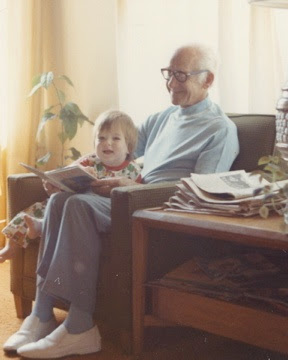 “I want to watch a record,” he would say
as he lay down on the tattered red and black couch
for his afternoon nap,
then much too young to differentiate
between watching and listening.
He was mesmerized by music even then,
calling out from his car seat,
“More Cat Stevens, Mommy,”
and singing “Oh, Baby, Baby, it’s a wild world”
along with the tape.
He sat in that car seat, sucking his fingers
when he wasn’t singing
and holding on to his stuffed green turtle
he loved so hard
we bought a six pack of them
so we could, in good conscience,
throw the old worn ones away. 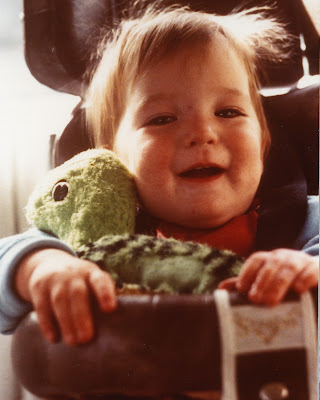 Paul and the turtle, at about one year
It came as no surprise he became a musician.
He started out with a sax, then piano,
then an electronic keyboard.
He taught himself how to play the guitar.
He could play almost any tune by ear
and never had my problem memorizing a piece.
By the end of his first year of piano lessons
he played “Chariots of Fire” in a recital.
His music brought him to New York
to study jazz at The New School.
He loved New York: the cold weather,
the fast pace, the dives, the Indian food,
the subways, the walkups, the late nights,
and the freedom to come and go anytime,
anywhere he pleased.
He was a loner and he fit right in
with the other talented loners there.
That is until he got sick.
Then he became afraid of New York.
He hated the sirens, he feared
people were poisoning his cigarettes and drinks,
he thought the Mafia was out
to hurt his girlfriend,
He saw hit men lurking in doorways
and he began running away.
One year he went back and forth
between New York and Los Angeles four times.
One time he walked from the lower East side
across the George Washington bridge
into New Jersey – just
to get out of the city.
Another time he took a bus
from Los Angeles to Ensenada
and spent the night in a Denny’s
because he didn’t have enough money
to get a room.
But he couldn’t escape.
No matter how many pairs
of brown Doc Martin shoes
he wore out,
he couldn’t walk away from
what was going on in his head.
The music he heard as a little boy
became his demon.
The familiar strains of Cat Stevens
and his beloved John Lennon
became the menacing voices
that told him to kill himself.
So, now I’m making a list of memories.
It keeps growing larger and larger
as one memory begets another
and another
and another.
2001
Posted by madeline40 at 3:16 PM