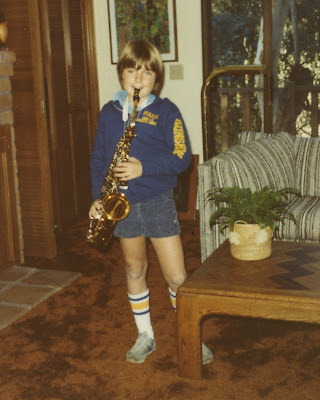 Paul, age nine, showing off his ability to play the saxophone

Though Paul always showed an interest in the piano – even as a baby – his first music lessons were at school on a rented saxophone when he was nine years old. But after a year and bumpy progress in his ability to play that instrument, he asked for a synthesizer. We said we’d get him one once he learned to play our piano. So at age ten he committed to piano lessons and regular practicing and within a year we knew he had a special talent. By the time of his Bar Mitzvah when he was thirteen, he had his synthesizer and a growing interest in jazz music. The next year he enrolled in Crossroads High School and auditioned to be in its jazz ensemble. He was admitted. Paul as a jazzman never looked back.
My Jazzman
My jazzman
beat it out
on the mighty eighty-eights,
played those riffs,
tapped his feet
bent his head
down to the keys,
felt those sounds
on his fingertips.
Yeah, he was a hot man
on those eighty-eights.
But all too soon
his bag grew dark.
He went down,
deep down.
My jazzman
played the blues,
lost that spark,
closed the lid.
And, yeah, you got it right,
quit the scene.
laid himself down
in that bone yard
for the big sleep.
Yeah, for the really big sleep.
(appears in Leaving the Hall Light On, Lucky Press LLC 2011)
Posted by madeline40 at 6:33 PM

this is such a fine tribute to your son-makes me tear up---you won't ever forget him-you don't have to worry about that-
Thanks for sharing this with your readers.
Marla Miller