Sometime during the first week of March 1993, my son Paul had his first manic (bipolar) break. He was a student in his senior year at the New School in New York City and was successfully playing jazz piano at several gigs in lower Manhattan and Brooklyn. All seemed to be going as planned as he worked toward graduating the following June.


Two weeks before he came home to Manhattan Beach for his grandmother's (my mother's) February 12, eighty-fifth birthday party. He was perfectly fine throughout the weekend.


Yet two weeks later his life and ours changed forever. 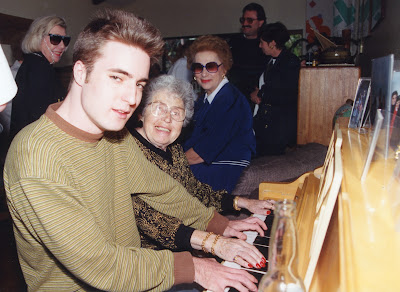 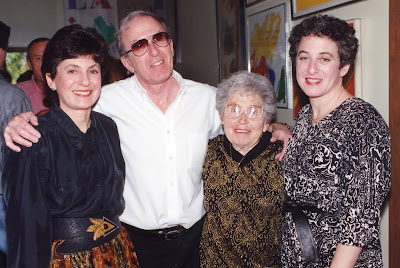 I'm on the left with my brother, mother, and sister at the birthday party
Posted by madeline40 at 1:15 PM

Email ThisBlogThis!Share to TwitterShare to FacebookShare to Pinterest
Labels: bipolar disorder, Leaving the Hall Light On, suicide, surviving after death of child

He looks so much like you! A very handsome young man, and I'll just bet he loved the women in his life (especially those in these pictures).

It is difficult to consider all of the "after" in the months following these photos, and yet, from reading your book, I know that you have pointed the way for others to see and remember and treasure the beauty of Paul, the wonder of him, as well as the reality of his illness. And to do this with their family members as well.

I encourage others to read your book because while it discusses a terrible, tragic event, it is not a book of tragedy, but one of living through and coming out the other side and knowing who you are as a woman and what you can do and give and need...it it truly a mother's story and it really has spoken to the mother in me. Since I didn't have the pleasure of knowing your talented son personally, for me he has become the representation of the thousands of young men and women with bipolar disorder who struggle to hang onto the life of their dreams, searching and hoping for a medical breakthrough. I hope one day there will be such effective treatment for mental illnesses like bipolar disorder that no mother need ever write a book about her child's death. Till then, we are fortunate that you found the strength and fortitude and open-heartedness to tell yours, and Paul's, story.

Thank you, Carol. He was indeed handsome. And yes, he was loved very much by the women in his life. And he still is. If only he had realized and could take comfort in how much he was loved.

Janice, I so appreciate your understanding of my need to write about Paul and how we as a family survived his death. Yes, my greatest hope is that no parent would ever have to suffer the death of a child as a result of bipolar disorder or post traumatic stress syndrome or the rest of the disorders that cause suicide.
In the meantime I hope my book lets others know that it is possible to come out the other end alive, well, and productive.