Miracles do happen - I'm sure of it

I’m struck once again how life and death events put everything into perspective. The petty things I was worrying over – what Pilates class should I take, when should I go to Portland to visit my sister, or even what should I cook for dinner – at the beginning of this week fell by the wayside when I heard the news that Ben had been in a horrific automobile accident on the freeway on Wednesday night while he was on his way home from acting class.
He called me the day after about noon to tell me about it. He was fine he said, he didn’t have a scratch on him, but his car was totaled. While I was hearing him tell me this news I began to cry – not about the good news that he was well and all that was lost was his car – but for what could have been. And then I quickly realized I needed to rejoice, not cry. My handsome wonderful son is still here with us whole and well – and we began to joke that his car, lovingly called Stanley, a Ford Focus, saved him.
I was even more elated when I saw him in person last night – two nights post accident – and he still says he does not have one ache or pain any where as a result of all the punishment he and his car took from being hit three times. Needless to say I couldn't hug him enough.
My Ben has always seemed to find folks to care for him, and this time was no exception. A woman stopped her vehicle so no one would pass until Ben was safely at the side of the road; a military man in full dress uniform stopped his car, came over to Ben to ask if he was all right, and then walked the width of the freeway to direct traffic, and others got out of their cars and began to help anyway they could. Even once he was at the gas station where the car was towed, he ran into a neighbor – someone who lives in the same apartment building – just at the right time to get a ride home. 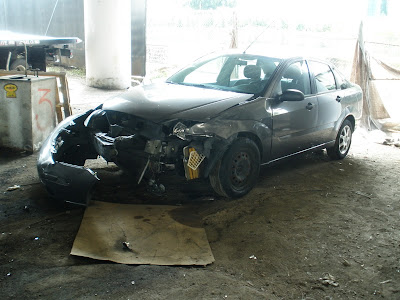 Stanley, the Ford Focus, that sacrificed its life
so Ben could walk away unscathed
will be forever in our hearts
This accident couldn’t help but remind me that Ben was in another very serious accident in Morocco soon after he graduated from Berkeley in 1996. He was on a tour of the Sahara Desert and the driver, who was speeding, lost control of his vehicle. The car rolled over five times and Ben ended up with head lacerations that needed ten stitches, and a broken shoulder, ring finger, and thumb – another miracle that he didn’t suffer any more damage. The driver left the scene of the accident (as did the driver who caused Ben’s accident this week), but stoppers by cared for him on the side of the road until medical help arrived.
We had to arrange for his transport home when he was well enough to travel through Casablanca and New York. His traveling companion accompanied him as far as Casablanca, and we asked Paul to meet him in New York and help him to his flight to Los Angeles. Paul was relatively well at that time – in between manic episodes – but seeing Ben in such a debilitated state, unshaven and dirty, barely able to move, and with bandages on his head, his arm in a sling and his fingers taped up took its toll on Paul. Ben had always been the strong, athletic brother. Paul was shocked when he saw him. Very shortly afterward, Paul had another manic episode, and we had to bring him back to Manhattan Beach – for the last time.
So, I rejoice again for the miracles that took care of Ben through both events and for those who cared for him. What Marissa, his bride beautifully said, is so meaningful, “Your son is divinely protected and he has lots of incredible things to do on this planet. I love him so much and I wanted to thank you both for putting him here.”
I wrote a poem for Ben on his twenty-fifth birthday that celebrates his specialness. It rings even more true today.
For Ben on Your 25th Birthday
Only suckling or
holding you against
my belly and breasts would quiet you.
Not even your thumbs
(you did not care which)
eased your cries
in those first few months.
When finally the crying stopped you emerged
determined to take on the world.
That Benjamin, we called you.
“Look, I can ride a 2-wheeler
and I’m only 3,” you shouted
with pale hair like fine corn silk
flying and huge hazel eyes
seeing nothing but the road.
You lived your young life in competition
reading the most books,
writing the most journal pages,
earning the most As,
running the fastest 10K,
collecting the most Garbage Pail Kids
and hitting the best
backhand down the line.
You loved the pressure
It made you nervous
(I said excited)
It was your fuel
You had to be the best.
Your tennis consumed you and me
We drove miles and miles
You in your trademark baseball cap
battled your opponents while
I battled freeway phobia.
Not quite 8, you overcame 1 to 6
in a 2nd set tie break
to win your first championship trophy.
They called you “Iceman” as
you cooly walked off the court.
It was not all serious.
You wrote the scripts and then filmed
Andy, Dan, Cam, Josh or Brad
walking down the long hall,
gun in hand,
ready to pounce on the next victim
or pretend to throw him over the deck
In every film someone went
over the deck.
For such a gentle, sweet boy,
you sure loved violence.
You also loved to mimic
McEnroe’s serve
Kline’s “k-k-k-ken”
Hoffman’s “I’m an excellent driver”
and the Three Amigos.
You made us snicker
when you called someone
an emma, a foof, a donkey, a nick
or cute and funny and silly and nice.
But I was most charmed when you
touched my face and said,
“your cheeks are nice and soft, are mine?”
or “come sleep with me for a minute”
when I would wake you
to get ready for school.
Little did I know that
that early play acting
was practice for your passion.
Arms uplifted, legs spread wide
Speaking in a loud, deep voice that comes
from the bottom of your belly
your presence fills the stage.
Lean, firm body
enclosed in a skin-tight suit
the color of a ripe peach
Finger and toe nails painted wine red
like the deep stain on your lips
Hair sticking up like the spokes of a bike
you cartwheel across the floor
You are now where you most want to be.
As your high school teacher said
you have the world on a string.
Keep a tight hold
It’s all yours for the taking
Just like you willed yourself to be
taller than your dad
You will be a success someday
in whatever you choose to do.
Happy 25th birthday, Ben.
Love, Mommy
Posted by madeline40 at 1:17 PM

M--I'm so very relieved to read that Ben escaped unharmed from his accident. Your poem for him is just lovely. And add me to your list of Americans who were in a car accident while in Morocco near the Sahara Desert! During my 3 weeks there, that happened and i also got an incredible bug or food poisioning. Since i almost came back in a box a few times over, i think i've gotten my fill of Morocco. Great trip despite everything. :)