The big "step down" is almost here - I hope!

Next week, we hope my husband's doctor will say it's okay for him to put weight on his healed broken foot. That doesn't mean he's home free. He'll still have to wear the boot, he still won't be able to drive, and he'll have to spend an unknown amount of time in physical therapy. But it's all a step in the right direction (no pun intended), coming not soon enough.

We have both gotten impatient and a little snippy with each other. Seven weeks of his being dependent on me and seven weeks of my serving him have taken a toll. I'm sleeping poorly. I have black and blue arms from all they hits they've taken by my husband's little scooter, and I'm feeling like my creative life has taken a step backward (no pun intended here either).

And I know he'll be glad when he won't have to be a passenger in his own car. Just this morning he was so frustrated when I was being particularly careful about backing the car out of our driveway into oncoming traffic. He wants me to be more agressive. Well, I'd rather be safe than sorry.

So there's your update on our foot adventure. It still goes on. But instead of another photo of Bob on his scooter or my black and blue marks, here's another beautiful beach scene. Just looking at that beach makes everything all right again. 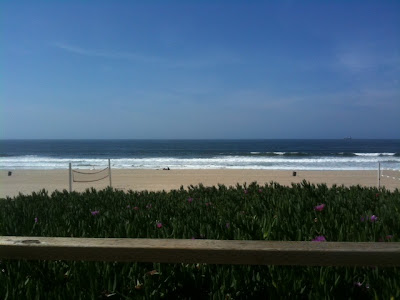 Let us know what the doctor says! For both your sakes I hope you get the news you want :o)