“With raw honesty and thoughtful reflection, Laura Dennis crafts a stunning psychological thriller in her true-life memoir, Adopted Reality. She weaves in three major life events – adoption, reunion with her birth mother, and a bipolar episode following the 9/11 terror attacks where her beloved Uncle Tom died in the Twin Towers and she believes she was responsible for his death,” writes reviewer Kathy Pooler. And most amazing is that it took Dennis only six months to write and publish her thriller of a story.

I was especially interested in Dennis’ writing about her manic episode because it rang true of what I remember about my son’s bipolar disorder. My questions have mostly to do with that aspect of Dennis’ story rather than her adoption and reconnection with her birth mother.

I’m so glad that Laura Dennis accepted my invitation to join me for a Q&A here on Choices. 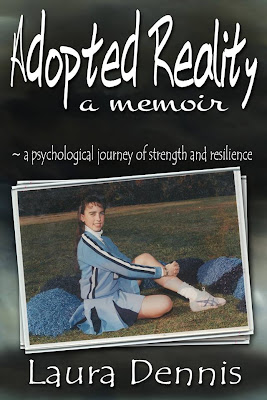 Madeline: I am so impressed with the way you have managed your manic and depressive states and with the clarity in which you describe them in the book. What is your process for staying focused and steady?
Laura: The main things are that I’m structured about my day, about getting enough (but not too much) sleep. I try to eat right and maintain an active lifestyle.
That said the more emotional/psychological process of maintaining my sanity remains in flux. Honestly, I don’t always catch when I’m heading out of hypomania into mania. When I’m multi-tasking, productive, and creative – that can be considered by some to be hypomania. If taken to extremes, it can lead to debilitating and unhealthy mania. On the other end of the spectrum, sometimes I fall into depression because I didn’t notice the triggers, such as sleeping too much or overall lack of energy and sadness.

Madeline: You mention early on that you weren’t diagnosed as bipolar because you never had a second manic break. Yet, later on you describe yourself as bipolar. Did I miss something? Or were you finally diagnosed with BPD? If so, why?
Laura: When I had my manic break in 2001, I’d just started an MFA program at the University of California, Irvine. I was on university insurance, and I received forward-thinking, excellent care. Around this time “manic-depressive disorder” was starting to be called bipolar disorder, and doctors’ understanding of BPD was changing.
For the sake of receiving proper psychological care (therapy and drugs), I needed a straightforward diagnosis. But within therapy, my psychiatrist told me that the only way she’d know “for sure” if I was bipolar was for me to have another breakdown. She also made it clear that my next break would be worse, with possible severe long term effects and a longer hospital stay. For me, the prospect of another break with reality was devastating and I was determined not to let myself get to that point again.
Although I was able to keep myself out of the mental hospital and ultimately off of prescription meds, I do consider myself to have bipolar tendencies, even if I don’t currently suffer from the full- blown disorder. That’s how I characterize it, at least.

Madeline: Your description of you manic break with its racing thoughts, paranoia, delusions, feeling like you were drugged, accompanied by little or no sleep and little or no food, is interesting to me since your words so aptly describe what happened to my son. How in such a state did you manage to remember all that you felt and how you acted? Did you take notes, did you keep a journal? What were your memory triggers?
Laura: In that agitated state, I was still very lucid; if a bit confused. After the fact, it wasn’t hard for me to remember the delusions, either. I found them incredibly interesting and visceral; no journaling needed! When I’m depressed and finally emerge, I tend to have a bit of amnesia about the mean things I’ve said, and the exact state I was in.

Madeline: It is very fortunate that you weren’t reliant on your antipsychotics and antidepressants during your pregnancies. How did you get along relative to all the hormonal changes and the added stressors while you were pregnant and after your children’s births?
Laura: When my husband and I decided to start a family, I was in a rather stable place in my life – married, home-owner, busy social life and even busier professional responsibilities.
The hormonal changes actually worked well for me--I think they stabilized my mood, and kept me from getting depressed. I was very worried about the weight gain, but once I realized that if I ate healthily, I gained weight at an appropriate rate. (The nausea throughout my entire pregnancy may have helped play a part.) As for mania, growing a baby is exhausting! I don’t think I could have worked myself up into a manic state even if I’d wanted to do so.

Madeline: You decided to refocus your creative juices from dance to writing as you learned to cope with your mania and depression. When did you decide to turn your story into a book? Also please tell us about your process in writing Adopted Reality. Did you take workshops, join a writing group, query agents and presses? In short, how did you turn your book from an idea into a published work and how long did it take?
Laura: I think I always knew I’d want to write the story of my adoption reunion and my mental breakdown. It was just a matter of finding the time and mental space. Moving to Belgrade has actually allowed me to do that, so no matter what, I’m grateful to our move for that.
I’ve always been a strong writer, so I pretty much just sat down and started writing. First the easy memories; the stories I’d told plenty of times. It just took discipline from there--to get everything down in the computer and then to spend hours and hours molding it into a readable form.
After the book was complete, I did send out some queries. However, I didn’t realize how hard it is for a non-famous person to get a book deal for a memoir. Also, given a lot of the recent controversy with truth-telling in memoir and Oprah’s Book Club, I really had an uphill battle if I wanted to go with traditional publishing. Here I’d written a memoir about a young woman’s break with reality ... It’s suspect. How much of that memory is true? How much can we trust someone with mental health issues?
In the end, I created my own publishing company, hired a professional editor and got the memoir on Amazon – both ebook and paperback. I used Createspace for the paperback, but I may try Lightening Source for my next project(s). I’m working on a psychological thriller, set in Belgrade (surprise, surprise), along with an adoption reunion anthology. All told, writing Adopted Reality took about six months, half that time for the writing get-it-out-of-my-head part, and the other half was for shaping the writing into (what I consider) a compelling memoir.

Madeline: Thank you again, Laura Dennis, for being here. I appreciate your taking the time to answer my questions. Your openness about your bipolar disorder will hopefully help us erase the stigma of mental illness once and for all. 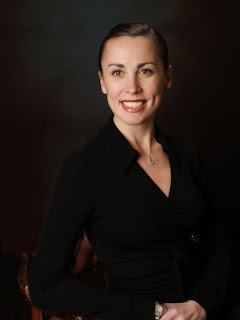 Laura Dennis was born in New Jersey and raised in Maryland, but she learned how to be a (sane) person in California, where she lost her mind and found it again in 2001. A professionally trained dancer, Laura gave up aches and pains and bloody feet in 2004 to become a stylish, sales director for a biotech startup. Then with two children under the age of three, in 2010 she and her husband sought to simplify their lifestyle and escaped to his hometown, Belgrade. While the children learned Serbian in their cozy preschool, Dennis recovered from sleep deprivation and wrote Adopted Reality. Dennis blogs at Expat Adoptee Mommy. Connect with her @LauraDennisCA and on Facebook. Her book is available on here.

Listening in on your conversations both here and on Laura's blog on what BPD looks and feels like has been educational and thought-provoking. You both show the real face of the condition both from the affected person'sPOV and from a loved ones POV. Laura you show the cpmplexities of the diagnostic process, often the biggest challenge in dealing with mental health issues-- knowing what it is so it can be properly treated. Your willingness to be so open in sharing will help break down the stigma and make a positive difference to many who suffer.

Thank you both for an excellent series and thank you Madeline for your mention.

Thank you, Kathy.
Laura's openness about her manic breakdown will be so helpful to others who have the disorder. My son really never wanted to talk about his illness and refused to stay on suggested treatment. I believe stigma caused that. Laura's attitude will help erase stigma.

Madeline and Laura, thank you for the series on Laura's blog and this interview on Madeline's about BPD. As you both know, my stepdaughter has been diagnosed with BPD. You both speak frankly and honestly from the perspective of patient and parent. Your ability to speak in this way will serve so many who read your blogs and who may have symptoms or know someone with symptoms. I applaud you both for your willingness to share these stories.

Thanks so much, Sherrey. That's really the point - to share our stories so others can benefit from our experiences. Hopefully, you'll be able to share this information with your stepdaughter. Wishing you and her all the best. xoxo