What is Stigma and How Do We Erase It? 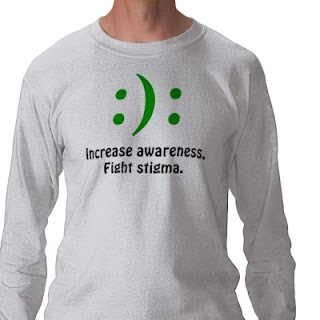 A few months ago my cousin came to our house to review and discuss the family history my husband had been writing. After reviewing the material he made one request – leave out the part about his father’s bipolar disorder. In fact he didn’t want to see any discussion of any of the mental illness that permeates my side of our family.

That was proof enough for me that the stigma of mental illness still exists.

Although my husband did not mention our family’s mental illness in the history, I openly discussed my grandmother’s, uncle’s, and mother’s mental illness in my memoir, Leaving the Hall Light On (now in paperback and eBook), and that I believe that their genes passed on bipolar disorder to my son.

The most important way to erase stigma is to open the conversation about mental illness. This conversation could cover several aspects:

How do you know what mental illness actually looks like? According to an article by Hugh C. McBride, “Stigma Keeps Many Teens from Getting Mental Health Treatment,” the symptoms are:
·      Mood swings, agitation, and anxiety
·      Altered sleep patterns (excessive sleeping or insomnia)
·      Loss of focus or inability to concentrate
·      Drastic weight changes (either gains or losses)
·      Fatigue or exhaustion
·      Loss of interest in hobbies, sports, school, or other activities that previously were important to the teen
·      Decline in academic performance, frequent absences from school, and skipped classes
·      Thoughts of death, expressions of wanting to die, discussions of suicide
·      Substance abuse (including the abuse of alcohol, illicit drugs, and prescription pills)

What kinds of treatments are available? Therapy, short or long-term hospitalizations, and prescribed medications specific to the type of mental illness being treated are typical.

What are the dangers if mental illness is left untreated? These could be addiction to alcohol and/or drugs for those who are self-medicating. Suicide is also a real risk.

As Glenn Close, who has a sister with bipolar disorder and a nephew with schizoaffective disorder, says, “What mental health needs is more sunlight, more candor, more unashamed conversation about illnesses that affect not only individuals, but their families as well.” To that end she created the bringchange2mind organization. 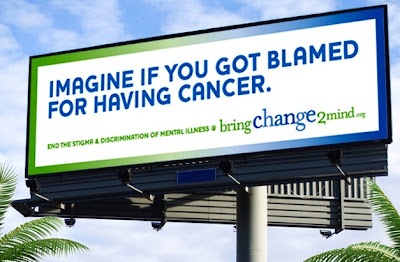 A recent Mayo Clinic article stated that progress has been made in removing the stigma of mental illness and mental health disorders, but agrees that it is still a real problem for people who have mental illness.

I know what a problem it was for my son. He worked for almost two years for a internet provider, and when they heard of the reason for his death his co-workers were shocked to know he had any illness whatsoever. He was a master at hiding his bipolar symptoms. He didn’t want to take his meds, he didn’t accept needed hospitalizations, he just tired to act as “normal” as he could. And that is probably what killed him. If he had taken the Mayo Clinic’s advice geared to erasing stigma – admit something is wrong, don’t feel ashamed, seek and follow treatment and support, accept help from family and friends – he  might still be alive today.
Posted by madeline40 at 3:16 PM