I posted this story last year. I don't think it hurts to post it again.

In El Segundo, CA, known as one of the last lazy 50s style home towns in the country, 3,000 miles from the crash site of United Airlines Flight 93 on September 11, 2001, Brenda Newman completed the delicate, intricate and sad work of restoring and repairing the bits and pieces of jewelry and artifacts recovered from the scene. 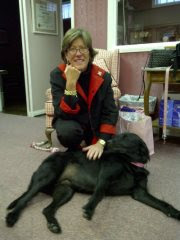 Newman is an elegant woman. Tall, slim, toned, with short reddish-brown hair softly feathered around her face, she is dressed for business in a tailored pantsuit. Most remarkable about her attire are her jewels – a huge emerald and diamond ring adorning her ring finger on her left hand, a ring with a large diamond surrounded by pave diamonds on her right pinky finger, a gold and diamond watch, hoop earrings with large square solitaire diamonds embedded in them and a whimsical pearl pin perched on her jacket near her shoulder blade.

Newman first told me of the work she was doing in January 2002. At that time she was working with the second batch of 36 pieces found at the September 11 crash site in Pennsylvania. The following April, she showed me the third package, a two-quart size baggie with about 35 smaller baggies inside, each with a number written on it with a black marker. She had no information about the names of the victims that corresponded to the numbers or even if a number corresponded to a victim at all. She restored over 100 pieces in all to be returned to the crash victim’s loved ones if their identity is known or photographed and displayed in a catalog so that family members have a chance to identify and claim them.

She reached into the baggie and pulled out a smaller one containing a gold ring. It was broken in two and flattened and distorted from the impact of the crash. There was a silver ring in the same condition.

“Look at this,” she said over and over as if she were trying to grasp the force that had reduced these precious keepsakes into pancakes. Some of the recovered items were loose at the bottom of the baggie. A single pearl, a few purple beads on a short piece of string, a quarter.  “There’s nothing to be done with these, absolutely nothing,“ she said.

“The first batch sort of haunted me,” she said. “I was moved, I was really touched.” Now, she says the impact is not so great. But, I could tell from her eyes – bright, shining from the tears just ready to flow, her work with these items touched her deeply.

She let me inspect the contents of the baggie a little closer. Everything inside was dirty just as it was picked from the ground, she explained, probably at the point 50 feet below the surface where the crash had the deepest impact. I saw lots of watch and bracelet parts, a large medal perhaps two to three inches in diameter with Latin words on it only bent slightly. I wondered why anyone would carry something like that on an airplane. Also in perfect condition was a heavy gold chain that looked like costume jewelry. There was also a white gold ring, still perfectly round. It once had five stones. Only one was left, and, that was a miracle.

In November, 2001 Sam Douglass and his son Sean, owners of the neighborhood mortuary, asked Newman to repair the pieces of jewelry that were recovered from the site. Sam explained that each recovered piece would need a before and after picture and that he would simply like them to be straightened and polished so that each piece could be returned to the loved ones with the greatest of care. Sam Douglass had been hired by the airlines to oversee the body identification, preparation, shipment, and funeral arrangements of the September 11 crash victims, work he has done many times before. However, this was the first time he was also asked to help catalog property.

Because of Newman’s standing as one of a few jewelers in the country accepted as an American Gem Society member for high ethical standards, knowledge, and professionalism in her industry, Douglass knew Newman could responsibly take on the job of restoring this precious property. Besides he has known her and her family since her grandmother was in business on El Segundo’s Main Street.

“I must say I felt both privileged and scared,” Newman said. “I was privileged he asked me because I respect this man and the caring work that his family business does. I was anxious because it occurred to me that I would be handling the jewelry the heroes wore. I feel honored to have touched it, repaired it, cleaned it, and delivered it in our little velvet pouches,” she said.

The first delivery consisted of a large plastic bag with about 24 individual baggies inside, each with the name of the hero whose recovered item was inside. Most notable was Andrew Garcia’s wedding band, identified by the inscription, "All my love, 8-2-69" on the inside. After Newman finished rounding it out with a tool called a mandrel, polishing it and placing it in her store’s, The Jewelry Source, trademark velvet pouch, it was turned over to the FBI who presented it to Garcia’s widow on December 26, 2001. She says Dorothy Garcia now wears her husband's wedding ring on her middle finger on her right hand.

Once work began she took each piece out of its individual baggie one by one, laid it on the table next to the baggie and photographed it with an Olympus digital camera. After taking the picture, she assessed each piece looking for cracks and fissures and discussed with her craftsman what, if anything besides cleaning and polishing could be done to the piece. If the piece could be repaired it was, like rounding out a flattened ring. After the piece was finally cleaned and polished – and for some pieces that was all that could be done – she laid it back on her table for the after photo and returned it to its baggie. She also made a hard copy of each photo. She gave the pieces of jewelry and photos to Douglass when the entire job was finished.

“When I sat down to assess what needed to be done,” she said, “I must admit that in those moments of reviewing the jewelry I physically felt the impact of what happened on that day. To hold what looks like a wedding band that is carefully engraved, or parts of an unrecognizable chain, or the wings of what could have been worn on the Captain’s jacket was overwhelming. Inspecting what needed to be done made me realize the impact of the plane. I am amazed that any artifact survived.”

Born and raised in El Segundo, her father was retired from the local fire department and her grandmother, had owned a beauty salon in the downtown area. Inspired by her grandmother’s entrepreneurial legacy, Newman said she wanted to be in the jewelry business since she was a junior at El Segundo high. She had a choice about jobs – the old Broadway Department store in Westchester, waiting tables at a local restaurant like the Main Street Café across the street, or working in a jewelry store. She chose jewelry and never looked back even though in her first job at De Luca Jewelers in 1974 she did little more than sweep floors and polish display cases.  Still, she said, she kept her eyes and ears opened and learned a lot.

After high school she attended the local two- year college, El Camino, and worked part time at the now defunct Christopher Bennett Jewelers at the Fox Hills Mall in Culver City. She later transferred to their Orange County South Coast Plaza store and eventually moved on to Cartier, and later, Jewels by Joseph. Finally, she took the six-month residency program at the Gemological Institute of America and became a graduate gemologist in 1985. This study allowed her to transfer her practical knowledge gained while working over 10 years in jewelry stores to the precise knowledge of gems and metals and findings and the business of jewelry.

She met her business partner, Roanne Mahoney, now retired, on the tennis court.  Mahoney, a painter who specialized in painting faux images on furniture has a great eye for color and style. Newman persuaded her to go with her to a local gem show where they bought pearls and beads and findings. They made jewelry out of their purchases and hawked their designs to their friends and local businesses. Their success from this adventure – their friends fell in love with their pieces – persuaded them to take the jewelry business seriously. So, seriously that Newman has been in business on Main Street El Segundo for over 18 years – six at her current location.

After Newman completed her work, Douglass presented her with a thank you plaque that read: “The Jewelry Source – In appreciation of your compassionate assistance in the Somerset County, Pennsylvania air tragedy of September 11, 2001 – S.W. Douglass, Airline Funeral Coordinator. “

“Though I didn’t personally know the victims and families involved in this tragedy, I have never found jewelry to be more powerful,” Newman said. And even though her long-time business has been the selling of beautiful precious things, this work gave her a new perspective. “You have relations and memories. It’s not the things that matter,” she said.