My husband and I just returned from a two-week trip to Frankfurt and Berlin Germany, Stockholm Sweden, and Oslo Norway. I'll post a few trip highlights in the next days.


By far the most exciting sight we visited was the Jewish Museum in Berlin.


There are absolutely no words to describe how I feel about it -- it is a museum like no other I've ever been - and I've been to a lot of museums. Everything about it reminds of the Jewish suffering throughout the ages. The angles, the voids, the stairways to nowhere, the zigs and zags, the orientation of the windows that provide no sense of the levels or rooms inside, the Garden of Exile on a 12-degree disorienting gradient with Russian willow oak growing on top of the forty-nine concrete pillars to symbolize hope.


Here is what the architect, Daniel Libeskind, said about the project in 1998.

"The official name of the project is 'Jewish Museum' but I have named it 'Between the Lines' because for me it is about two lines of thinking, organization and relationship. One is a straight line, but broken into many fragments, the other is a tortuous line, but continuing indefinitely."
The museum opened on September 9, 2001. 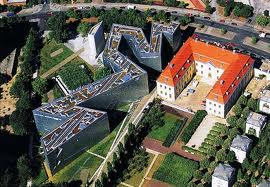 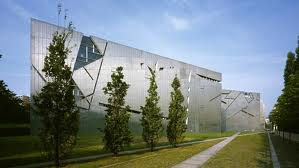 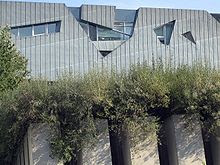 Garden of Exile
Posted by madeline40 at 2:34 PM

What a wonderful reminder of the power of the human spirit to overcome all the obstacles mankind may create in its darkest moments. The quest for justice and the power of love are forces which have no bounds.
Best wishes. Jeff.