Putting a Face on Suicide

The Facebook Putting a Face on Suicide is a personal project of Mike Purcell done in collaboration with the American Association of Suicidology. Mike’s son 21 year old Christopher Lee Purcell, died by suicide in 2008. www.facebook.com/purcellmemorial
As Mike states: every 15 minutes someone dies by suicide in the United States, that’s 96 or so people each day.
Putting a Face on Suicide [PAFOS] is an ongoing project soliciting pictures of your loved ones who died by suicide. Each 96 pictures will be used in a poster and a video, representing one day’s loss. The posters and videos will be posted on the PAFOS facebook page and may be freely used by any person or organization to promote suicide awareness and prevention. The goal of PAFOS is to collect 35040 faces representing 365 days of loss, and then to visually send a very powerful 35040 faced message. Please go to http://www.facebook.com/puttingafaceonsuicide?sk=wall to see the faces gathered so far.
So far four videos have been complied with the able help of fellow survivors, Mel Maranian and Laura Shearer. My son's Paul's photo is in the Day Four video and his music plays in the background, lovingly edited by Mel. http://www.facebook.com/video/video.php?v=10150197241441770
Another project of PAFOS is a series of posters to raise suicide awareness and prevention. Each has a face and a message. Because Paul was a creative guy, Mike tied his bipolar disorder to creativity and the statistics of depression as it relates to suicide. 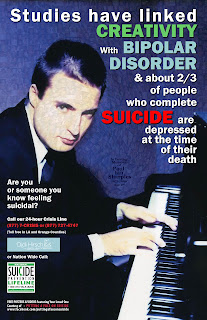 He also asked what organization I supported and then highlighted the Didi Hirsch Mental Health Services on the poster.  http://www.didihirsch.org/ Didi Hirsch started the first suicide prevention hotline in the Los Angeles area in the 1950s.
The goals of my memoir, Leaving the Hall Light On, are in keeping with the goals of Putting a Face on Suicide. I believe that together we can raise awareness, erase stigma, and make a difference in the lives of families all over the world.
Posted by madeline40 at 1:11 PM

Hi Madeline, This is incredible. Thank you for taking the time to mention our project. Precious Paul, his handsome face and talents made day four of the project a huge success. His poster is one of my favorites and the music he provided for the video was very well received by all. Paul was truly gifted. Thanks again for being a large part of and sharing our project. Mike [ from putting a face on suicide ]

How do I find the video for Day 11

Please go to the PAFOS page and scroll down the left side. You'll see the Videos heading about half way down. Click on the arrow and you'll find Day 11.
Also, please note I don't use this site anymore. All of these posts and more are at my new site:

I'm so sorry for your loss. xo Madeline