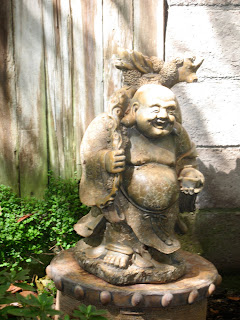 My garden Buddha says it all

I remember sitting in a circle every morning at an Esalen workshop with everyone in turn giving a one-word check-in assessment of where we are with the day or anything else on our minds. So if I were to give one word for today’s check-in I could say “busy.” However, a better word is “successful.”
I’d say my WOW blog tour is going very well http://www.wow-womenonwriting.com/ . Almost every day is full between June 6, the launch date, and July 1, the last day. If I don’t have a guest blog out there somewhere, a blogger is posting a review of my book. I feel that they are all doing a very caring job. The woman today asked that all who comment learn about bipolar disorder, and she also gave statistics about suicide. Hopefully this tour will help sell books though it’s certainly hard to tell at this point. Last week my rank was number seven in books sold under bipolar at Amazon. Today it is number eight-seven. I really have no idea what that means. Another success is that two more five-star reviews went up on Amazon.
My article, Keeping Fit After Seventy, for Huffington Post’s That’s Fit page is a success way beyond my expectations. http://www.thatsfit.com/2011/06/09/keeping-fit-after-70/ It  was just dropped off the three most popular list after a week on it, moving up from third to first spot. I am definitely stoked. People “Liked “it, tweeted it, copied it and left over forty comments. Most were great, and a few not so great. I’m glad that so many folks bothered to write a comment at all. Many women my age feel as I do about keeping fit though one person 74-yeear-old told me to get a life. Another said she got her exercise doing her housework and running after her grandchildren. Well, I do have a life outside of exercise – in fact if I didn’t workout I wouldn’t have as good a life as I do. And if I had any grandchildren I would gladly run after them instead. One woman said she joined Red Room http://www.redroom.com/user/madeline40 as a result of my article. That was a huge and welcomed surprise.
The lesson here is that I can be successful writing about something other than bipolar and suicide. It makes me want to go back to my novel. The only thing I haven’t been doing much of lately relative to my writing is poetry. I can’t seem to get anything going there. I’ve used a couple of Robert Lee Brewer’s prompts http://blog.writersdigest.com/poeticasides/ lately and done reasonably well with them, but I seem to be having a little bit of a poetry block right now.
Speaking of, my book was mentioned in Robert’s round up this week https://mail.google.com/mail/?shva=1#inbox/1307d7c33e3feccc
and it was the featured book on #bookhashtags http://bookhashtags.com on Wednesday. It’s also in the International Women’s Writers Guild http://iwwg.org newsletter this month. So the word is getting out there slow but sure. As my publisher says, “Whoopee!”
Posted by madeline40 at 12:48 PM