What do you think?

I saw a photo of a women about my age with beautiful flowing gray hair this morning, and I felt validated for choosing to keep my hair long. As a matter of fact, I plan to tell my hair stylist to trim "just a little" at my haircut appointment this week.

Seeing the picture this morning reminded me of the New York Times article by Dominique Browning that appeared on October 21, 2010.

By the way, here's my latest photo - long flowing gray hair and all. 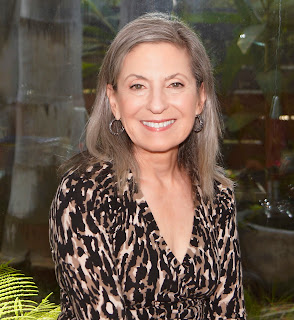 Loved your blog. 51 and still have the long locks!
Sarah Martin Byrd
www.sarahmartinbyrd.com

You're beautiful- and so is your lovely long hair.

When I was a teen I once wrote down everything that everyone suggested to me that I should do to my hair. The long list included: cut it, grow it out, wear bangs, no bangs, perm, no perm, bleach it blonde, dye it black...you get the picture.

The only thing no one ever suggested I do was shave my head though I'm sure that if I'd kept listening, someone would have. Now I wear it the way I want, and don't give it a second thought.

Madeline, I love your long hair and I think you look beautiful and elegant with it. Long hair gives a softness to one's appearance, I think, and depending on their features and body, this can be a good thing. Dark hair (through dye) as we age tends to look harsher and make us look older (I think), so maybe silver hair is nature's way of softening our look and adding to our mature beauty. Your hair is framing your face, not overpowering it.

For much of my life I had really short hair, really really short hair. I've had it dark brown (my natural color), red, and blonde. I think of coloring my hair like one more thing I can paint. But I now have it long and I like the versatility of that. I wear it in a ponytail most of the time (because I am always too hot) or up on top of my head. But when we go out, I wear it down and Mark loves that. Even my sons have an opinion on my hair, they prefer it long as well.

I'm not sure why the prejudice against long hair, but I've heard it myself, so I know some folks are very confused on this issue! Some women "run with scissors" and others "walk with long hair and carry stones." That would be us!

Thank you all for your comments and kudos.

Bob always says he fell in love with a girl with short dark hair. Unfortunately I can't be that girl for him anymore, and that, I think, the source of my conflict about whether to keep it long or to cut it.

But, one thing is certain - I won't dye it anymore. Dark hair against an old face just doesn't work - as Janice says.

So for now - hooray for long hair on aging women. I love the versatility too.

I am 36 years old and have battled to get some lenght for years. I think long hair is absolutely adorable. Especially that morning look . when you get up and just put a clip in with out combing it first .

I can't wait for your hair to become grow longer! My hairstylist there is only one reason why a women should cut the hair: when it's not healthy or very thin. As long as you have healthy, strong hair, you can wear it at any lenght.
I have the same discussions at home with my 3yr older sister and my mum who is your age. Besides, there is nothing more soothing than a nice hair-mask or conditioner, detangling and softening your hair.

I'm about to get a haircut again tomorrow, and I was being wishy-washy about cutting or not cutting yet again. After rereading this, I've decided to keep it long. Just a trim, please, Ma'am!