The sad tale of the travelling dress 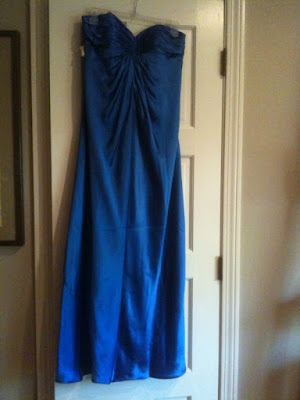 Pretty dress even though it's a little wrinkly, right? Well, it should be a little wrinkly and worn out by now. After all, it travelled half way across the world. And, unfortunately it never came off the hanger.

Why is that, you might ask. Well, see that little white thing on the left side, just under the bust line. That's a security tag. Yep, that's right. I bought it at Nordstorm especially for one of the formal occasions on our recent cruise. The Nordstrom seamstress shortened and took it in a bit, and the salesperson  packed it up for me in a garment bag, and all the while neither noticed the tag was still on.

Sure, I should have checked as well or least gotten a warning alarm as I took it out of the store with that pesky thing still attached. And, I never noticed it was there until I was ready to put it on somewhere in the Gulf of Finland. And then it was too late.

My husband immediately went to the dress store on the ship and asked for help, but the salesperson's reaction was, "No, not again!" She said it happens at least two times on each cruise. But, unfortunately she didn't have the device to remove the tag. Why should she? She had the perfect solution -- buy a new dress from her and take the one with the tag back to the store when you get home. She also warned not to try to take the tag off ourselves. We would surely ruin the dress.

Well, I didn't buy a new dress -- I made do with what I had. But, I'm going to take this pretty blue dress back to Nordstom today.
Posted by madeline40 at 11:43 AM