On one of the first days of our trip and coincidentally on my birthday I carelessly left my laptop behind at the security checkpoint as we were getting ready to board a flight to Washington DC from Chicago. Seconds later, as shown on the surveillance tape, a large African American man dressed in Army fatigues with sunglasses perched upon his bald head, took it. So, of course when I realized I didn’t have it about 20 minutes later and went back to the checkpoint to see if I could find it there, it was gone.
Unfortunately, the TSA folks and the Chicago police began to help much too late to find the man still in the airport. Before its theft became a cause célèbre he was long gone. First, the TSA guy at the security checkpoint gave me a number to call for the security folks upstairs. When I called they said they would look at the tapes and call me back. That took about a half hour.
They then called the Chicago police and asked me to meet an officer back at the security checkpoint. There ensued another delay because I first had to tell the officer the story, and then he had to hear the same story from the TSA folks, and by then hordes of folks also had to hear the story and fill out paperwork before they got anyone to start looking for the guy. But, alas, it was already about an hour and a half later, and by then, the thief and my computer no longer on the ground -- at least not in Chicago. So, we left Chicago for Washington DC on a later flight computerless. Fortunately, United Airlines didn't charge us for the changed flight time.

We went to the Apple store in Pentagon City to replace the computer the next morning. This time I got a LoJack computer tracking system. I also bought Mobile Me so I could download all my work to there – daily. Even though I was backing up onto a thumb drive pretty regularly I lost a couple days worth of work – I think one journal entry, a piece for my book, a poem, and the blog piece I wrote for Red Room. I recreated the blog piece in long hand and typed it in on a hotel computer so I wouldn't miss the deadline, but I’m afraid the other three things were lost forever.

So the huge lessons are: make sure you have all your stuff with you when you leave a security checkpoint at the airport -- no place is safe from theft, make sure you back up after each work session on your computer, install a security system on your computer -- and an access password, and make sure you shut down your computer every time you stop working on it -- I just put my computer to sleep before I went travelling with it.
Now for the Found part:
A few days before the end of our cruise I realized I had lost one of my hats. It wasn't in its cubby in our stateroom and it wasn't on the shelves where I kept my clothes. (Because of our small quarters I always made sure everything was in its place.) And, with all our touring I realized I could have left it anywhere.

Even so, on the day before we were to disembark I decided to go to the Purser's desk (like the front desk at a hotel) and ask if there was a lost and found on board. The man at the desk asked what I had lost. "A cap," I told him. "What color?" he asked. And before I even got the word "purple" out of my mouth he gave me a big smile. Both of us said with the word Woof on it at the same time. He left to go into the area behind the desk and brought out my hat. I must have left it in one of the tour meeting areas, and some kind person picked it up and turned it in. So not everyone takes the opportunity to commit a crime. I'm thrilled to have my Woof hat back -- a gift from my veterinarian niece.
Here it is: 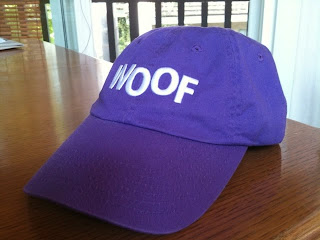