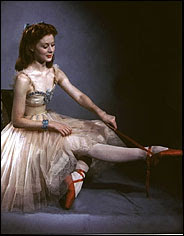 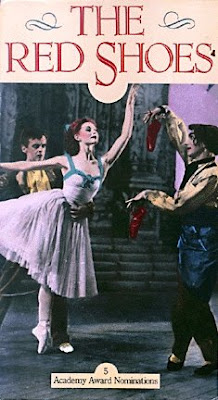 My niece, Dara, and I saw the remastered classic film, "The Red Shoes," at the Hammer UCLA musuem this morning. It was as beautiful -- or more so -- as I remembered. The film, premiered in 1948 was written, produced, and directed by Michael Powell and Emeric Pressburger and starred Moira Shearer -- with the white skin and flamming red hair. I remember that when it first came out I wasn't allowed to see it. The dancer's suicide at the end made the subject too mature for a little girl of 8 years old. When my parents finally relented I couldn't get enough of it. The dancing alone was an attraction, and I'm sure the theme of art vs life was something I didn't understand early on. Like Martin Scorsese said in his intro to this revised version, we do art not because we want to but because we have to. The heroine of "The Red Shoes" was asked to make a choice between dancing and her jealous husband. And, she couldn't. She had to dance, and eventually couldn't live if she had to give it up.

Scorsese also called this film a masterpiece because of the color, the scenery, and the way dance and music are integrated in a dramatic film. The film's acting along with the dancing and music is brilliant. From the time I was a little girl it became my favorite film. It still is.

Go see it if you have a chance or get the new remastered version on DVD when it comes out.
Posted by madeline40 at 4:15 PM