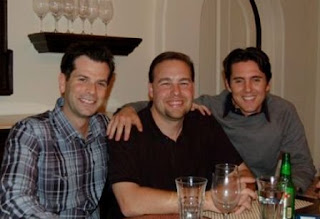 There's Ben on the right with two of his friends whom he's known since grade school. In fact, Andy in the middle and Ben go back to Kindergarten. We had dinner with them and their families -- one of the boys has five children and the other has two -- on Friday night. It was like going back in history. We caught up, we played with the little children, and told old, old stories. In fact, we looked at a video that they made while in middle school. So much violence and bad words for such a gentle bunch of boys.

The night was pure pleasure.
Posted by madeline40 at 5:00 PM