Welcome the editors of the new anthology, Beyond Belief, The Secret Lives of Women in Extreme Religions

I'm so excited to offer you a giveaway of the anthology Beyond Belief, The Secret Lives of Women in Extreme Religions. This is also your opportunity to join Cami and Susan for a discussion on: "Why Women Stay in Religious Communities."

Thank you, WOW Women on Writing, for inviting me to host Cami and Susan today. 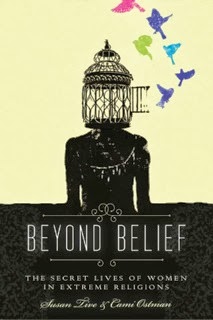 Beyond Belief addresses what happens when women of extreme religions decide to walk away. Editors Cami Ostman (a de-converted fundamentalist born-again Christian)and Susan Tive (a former Orthodox Jew) have compiled a collection of powerful personal stories written by women of varying ages, races, and religious backgrounds who share one commonality: they’ve all experienced and rejected extreme religions.

Covering a wide range of religious communities—including Evangelical, Catholic, Jewish, Mormon, Muslim, Calvinist, Moonie, and Jehovah’s Witness—and containing contributions from authors like Julia Scheeres (Jesus Land), the stories in Beyond Belief reveal how these women became involved, what their lives were like, and why they came to the decision to eventually abandon their faiths. The authors shed a bright light on the rigid expectations and misogyny so often built into religious orthodoxy, yet they also explain the lure—why so many women are attracted to these lifestyles, what they find that’s beautiful about living a religious life, and why leaving can be not only very difficult but also bittersweet.

Why Women Stay in Religious Communities

Cami: We often get asked why women stay in religions which restrict their movements in the world or limit their freedoms. As you might imagine, Susan and I have talked a great deal about this; it was one of our primary guiding questions as we sorted through submissions for Beyond Belief. Why would a smart woman (perhaps even a well-educated woman) stay in a religion that restricted her actions and opportunities or, as in some religions, downright blamed her—by virtue of being Eve's sister—for sin existing in the world? Let me first speak for myself.

I adopted my faith as a teenager, at a time when I needed guidance and structure. By the time I was an adult ready to guide my own life, my whole worldview was informed by my theology and my entire sense of community was built around my church. Although fear of outsiders wasn't as strong in my situation as it was for some of the other women who contributed to Beyond Belief, my community nevertheless had an "us and them" attitude that made me feel I was in a very special, very chosen group. Far from this feeding my ego, it gave me an overwhelming sense of responsibility toward the rest of the world—to evangelize them. And the only people who understood that responsibility were those who shared my faith.

Though every woman who stays in a restrictive religion has her own story, one of the commonalities is that tight knit religious communities provide a sense of safety and of being understood—until you step outside of their expectations.

What would you add from your experience, Susan?

Susan: Traditional religions offer women great support and encouragement especially in so far as they uphold the roles of wives and mothers. In my faith community, Orthodox Judaism, I felt, for the first time, valued as a stay at home mom. My role was honored and reinforced not just with passing lip service but with actual laws and rituals that celebrated the importance of family and home. Before I joined I had searched for but hadn’t found that kind of structure in the secular world and I knew if I went back out there I would lose a way of life that had helped me find meaning in my role as a woman and a mother. It’s never easy to give up structure, identity and security even if you have it because you are trading your rights and freedoms for it.

In my case, as with some of our other writers, I stayed because of the real threat that I might lose my children if I left. It took me many years to finally gather the strength I needed to make the break.

As many of our writers have noted leaving can be disorienting and downright scary. Women who leave must walk away from a way of life in which they have put their whole hearts. Their own identity, sense of meaning, purpose and place in the world is bound up in their faith. Add to that the fear of the how to function in the outside world as many religious communities tend to isolate women and you can see why leaving is such a huge and heroic decision to make.

Cami: Exactly, in order to leave, one needs to have resources elsewhere. The only thing I would add to this is that, much as with an abusive marriage, the sweet times can be very sweet. Sometimes there can even be long periods when the feelings of being protected and accepted are at least as intense as the sense that one is slowly dying of spiritual/psychological/personal starvation.

We obviously don't have all the answers, but we are glad to have had the chance to explore the question and we'd welcome hearing from readers. What have you stayed in too long (maybe it was a relationship or a job instead of a faith community) that asked you to be less than who you knew you could be? Why did you stay? What helped you decide to leave?

Susan: One thing that has surprised me about our writers is that very few of them have become bitter or anti-religious by their experience. The majority while no longer religious are still very considerate of the faiths they left behind and will openly admit to what they miss about their religious life and what they still carry with them. One of the goals for Beyond Belief was that by giving women the opportunity to tell their stories we could create a dialogue that would be healing and helpful for both writers and readers. It’s gratifying to see that the anthology has achieved that goal.

Thank you so much, Cami and Susan. Even though I'm not from an extreme religious background, I find this a fascinating subject - one that I've been introduced to many times in the last few years. I admire the bravery of these women to break away and still remain whole and productive.

Please leave a comment here at Choices to be in the running for a free copy of Beyond Belief. The winner will be picked at random next Wednesday, October 2, 2013. 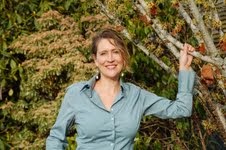 Cami Ostman is an author, editor, life coach and a licensed marriage and family therapist with publications in her field. She blogs at 7marathons7continents.com and on the psychologytoday.com blogger team. She has appeared in several publications, including O, The Oprah Magazine, Fitness Magazine, Adventures Northwest, the Mudgee Guardian in Australia, and La Prensa in Chile. Cami is a runner and a dog lover who lives in Bellingham, Washington. 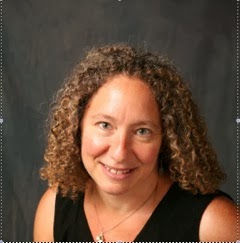 As a writer, editor and researcher Susan Tive has worked on a variety of academic articles exploring psychology, feminism and religion. Susan’s interest in these subjects led her to become an editor for several non-fiction titles including Faith and Feminism and Rachel’s Bag. Her new anthology Beyond Belief: The Secret Lives of Women in Extreme Religions was published in April 2013 by Seal Press.

Beyond Belief: The Secret Lives of Women in Extreme Religions is available as a print and ebook at Amazon.
Posted by madeline40 at 6:00 AM

Thank you so much for being part of this WOW! Women on Writing blog tour of Susan & Cami's work. This tour has been such a pleasure and the ladies are a joy to work with.

Thank you to Susan and Cami for your honesty and bravery in sharing your stories.

It is my pleasure as always to host writers on a WOW blog tour. Thanks for asking me to participate.

Both Cami and Susan are the real deal--warm and delightful women. As a contributor to the anthology, I had the pleasure of meeting them last spring at Powell's City of Books in Portland, Oregon. The room where we stationed our book reading and signing was standing-room-only which indicates a genuine need for understanding and support. It was very interesting to speak with many of the attendees who revealed that they'd also left organized religions and struggled with many of the same issues we write about in the book.

Thank you Madeline for helping spread the word.

Thanks all. Grace, it's nice to see you here. Those who enjoy our anthology will enjoy Grace's full memoir: Reaching (http://www.amazon.com/Reaching-Grace-Peterson/dp/0989403203).

Editing Beyond Belief was a privilege and we hope it invites conversations around kitchen tables all around the world.

There are so many important lessons that are shared here. I've been drawn to this book since I first heard of it. My wish is that the stories in Beyond Belief will open up and allow others to walk away from lives that never benefited them, or no longer benefit them. Benefit, of course, is the wrong word...they walk (run) from lives detrimental to their very beings.
I also love the tone of this interview, which I assume will be the tone of the book: gentle and grateful.
BTW, I am of no religion, but once escaped a terrifying life when I was a young married girl.

Congratulations, Grace, for contributing to this wonderful anthology. I'm not surprised that so many others resonate with your experience.

And, Cami, it is my pleasure to host you and Susan on your WOW blog tour. I wish you great success with Beyond Belief.

Thanks, Patti. I agree. The tone of the interview is so gentle and grateful - an inspiration to others who might feel the same way about their lives. Thanks for stopping by Choices. Best, M.