[This is a reblog of Eleanor Vincent's post today - by permission]

I’m throwing a party for the rebirth of Swimming with Maya. Thanks to the power of networking, it has a new life as a paperback and eBook.

But in 2010, the future of my book did not look bright. Capital Books, the independent publisher that issued the hardback in 2004, was closing its doors. My beautiful book about raising daughters and rebounding after loss would be pulped. 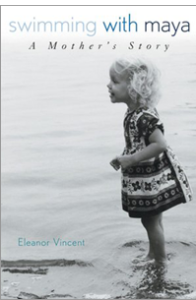 I tried everything I could think of to sell the remaining hardback copies – and had some success. But even if I sold them all, the book would still slowly fade and die. I considered the Author’s Guild program “Back in Print” that creates print-on-demand books for authors in situations like mine. But I’d have to live with a generic book cover and format, and no marketing support for the book.

Sadly, this story is not uncommon. Small publishers close their doors with alarming frequency. And big publishers – those consolidated megaliths – can arbitrarily dump an author if sales don’t measure up.
In worst-case scenarios, authors get little or no notice. My dear friend Madeline Sharples, author of Leaving the Hall Light On, a courageous tale of resilience and recovery following the suicide of her son Paul, had recently received three days notice that her publisher was closing.

Madeline and I met at a writing workshop at Esalen, just months after Paul’s death in 1999, and instantly connected. Over the years, we saw each other whenever we could, and stayed in touch by phone and email, becoming cheerleaders for each other’s ventures in the world of small publishing.

Madeline reached out to other writers when she learned that her book was about to go out of print. She soon connected with a small press in Chicago called
Dream of Things that agreed to republish her memoir in paperback and eBook format. She promised to introduce me to the publisher, Mike O’Mary.

At the same time, in the spring of 2012, I had just marked the 20th anniversary of Maya’s death. As I sat under a giant California oak tree just yards from her grave, I got a strong message from Maya: “Mom, I want you to bring back our book.” Maya did not want to be forgotten, and I didn’t want her to be!

As in life, she insisted on her place in the spotlight.

That afternoon at the cemetery I made a promise to my daughter. One way or another, Swimming with Maya would be back.

True to her word, she introduced me to Dream of Things founder Mike O’Mary, and by the fall of 2012 I had a contract. Mike worked tirelessly to reissue the book and in February of 2013, the new version was published.

Madeline and I were both born under the sign of Taurus. (My birthday is May 14, hers is May 20.) We never give up! I was with her in Los Angeles in May of 2011 for the original launch of Leaving the Hall Light On, and she will be with me on Friday, May 17, for the “Rebirthday Party” of Swimming with Maya.

Please join us at 7 pm, May 17, at Studio One Art Center, 365 45th Street, in Oakland. Or come at 5:30 pm, and join the fun at “Bites off Broadway,” showcasing amazing local food trucks, hosted by my friend Karen Hester.

Come celebrate new beginnings in life and in publishing with us! 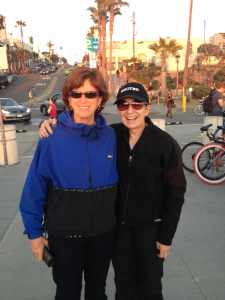