Since my memoir Leaving the Hall Light On has been checked out of my local Manhattan Beach Public Library many times, the library director asked me to come there to speak. The date we decided on was last Wednesday evening, March 20. 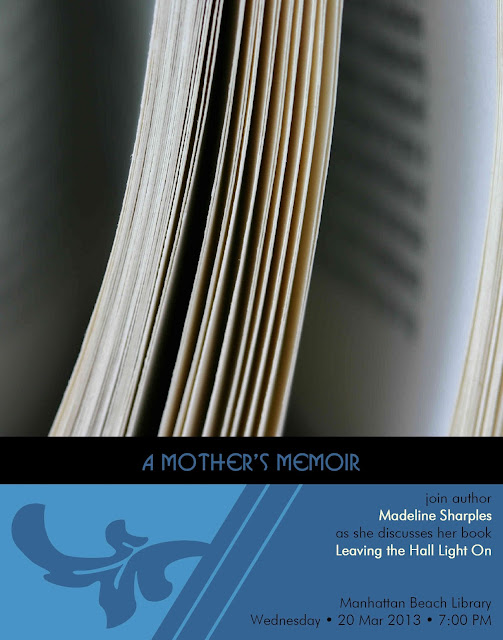 I was asked to supply the library with a jpg of my book cover and a brief description of my topic:

Writing was healing because it helped me put my pain on the page. Instead of carrying it with me every moment of the day and night, I found a place where I could have a little relief. There was so much I couldn’t say out loud to anyone. And since there was so much sadness, anger, and grief in me, I needed a place to put it.  Writing was like repeating a mantra as I kept my fingers moving. And I wouldn’t let anything get in my way. I recommend writing or another creative outlet to those who are looking for ways to heal.

After that I was on my own. My instructions were: you have an hour and a half from 7:00 to 8:30 pm to speak. That was it. I was left to create a program that attendees might be interested in from whole cloth.

Well, I’ve known from previous experience that the eyes of most people in an audience begin to glaze over after twenty minutes – sometimes even after ten – so I needed to create an event that was both interesting and way less than an hour and a half.

I divided the talk into three parts: 1) my work and writing experience, 2) how writing helped me heal, and 3) how I created my book. And I picked out book excerpts, poems from the book, and readers’ comments to read after each section of the talk. That was about forty-five minutes of me talking and reading. I opened it up to audience questions and comments at that point. I also put a list of local resources for people needing mental health and suicide prevention assistance, several copies of my book for purchase, and my bookmarks on the table in the front of the room next to the podium. About thirty chairs set up in three or four semi-circle rows faced me.
By five minutes to seven one chair was occupied – by my husband. But in the next five minutes several more people wondered in until I had a total of ten people in the audience, two of which worked in the library.

I was disappointed that so few attended, yet those who did were there because they had similar stories to tell – something I experience whenever I do a public reading or signing. As soon as I opened the program up to questions and comments, these people’s stories of mental illness and suicide started to pour out.

And though my library talk had low attendance, it wasn’t for the lack of trying. The library folks made a poster and flyer and advertised on their website, the city council, and the local newspapers. I sent out over seventy invites to Manhattan Beach residents through a Facebook event. Perhaps the subjects of bipolar disorder and suicide kept them away. 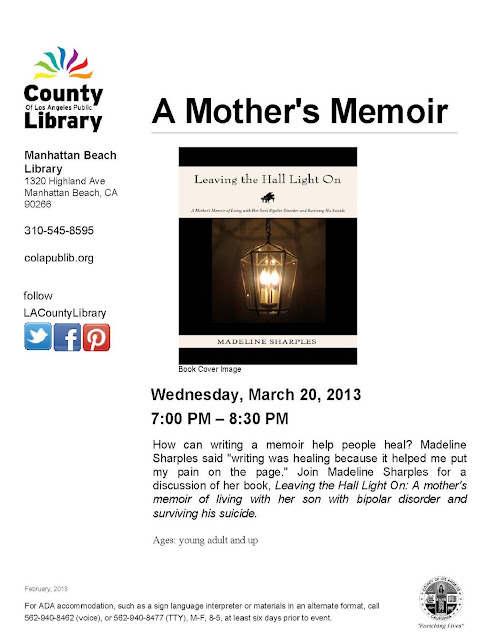 The best part: my small engaged audience applauded heartily, I sold a couple of books, I created a program I could present anywhere, and even my husband gave me presentation kudos. With that I consider the evening a success.