Whenever anyone in my synagogue community dies I get an email from the rabbi. I read today’s email at about five in the morning that Jill Cherneff Laverty died – probably yesterday. I had heard last week that it wouldn’t be long, but even so I definitely wasn’t ready for the news. Jill had ALS and she lived over six years with it, much longer than most ALS victims, but still, it’s hard to take.
Persons with ALS have a loss of muscle strength and coordination that eventually gets worse and makes it impossible to do routine tasks such as going up steps, getting out of a chair, swallowing and then, finally, breathing. ALS does not affect the senses (sight, smell, taste, hearing, touch), and only rarely affects bladder or bowel function, or a person's ability to think or reason. That’s why I've heard that it must be like being in prison or a coffin. There is no known cure for it. It is a ruthless and certain killer.
I understand that Jill’s first symptom was difficulty in speaking. Ironically, her voice is the very first thing I ever experienced about her. I was downstairs getting dressed and I heard her voice from upstairs at our dining room table talking to my husband, Bob. She had come to pick up her then fiancé’s son who was playing with our young son Ben – probably back in the early 1980s.
It breaks my heart for what she had to endure with that disease – the gradual but steady progression from a vibrant, active, and beautiful women to one who ended up not being able to move any part of her body.
It also breaks my heart that we were no longer friends. She decided to break our connection after her son Geoffrey was killed in an auto accident, probably because I brought along too much reminder baggage. I was told she severed relations with several people in the year after Geoffrey died.
But it still hurts. We went back a long way. We knew Jill and Rocky, her husband, before they were married. We were invited to their marriage dinner at the home of his parents. We went to the desert together, we had dinner at each other’s homes, and our families celebrated Hanukah together many times. We used to play tennis, take walks on the Strand in the early mornings, and when I worked in real estate I represented them in a purchase of a home. Plus, I make her recipe for potato pancakes every year at Hanukah time. Jill was a wonderful cook. 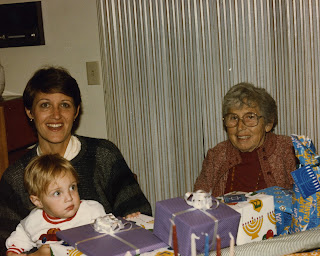 Jill, Geoffrey, and my mother, Hanukah, 1984
So, it also breaks my heart to know that I missed being with her during the most crucial time of her life, the progression of her illness. I’m glad to say that she had a group of friends who came by regularly to play scrabble, discuss books, and bring in meals. I’m just sorry I wasn’t one of them.
And now I wonder if I should attend her funeral. Perhaps it will bring closure for me – a chance to say a proper goodbye. Certainly, she can’t tell me to leave.
Posted by madeline40 at 3:42 PM

A beautiful essay, Madeline. I've heard that funerals are for the living. You are living, so if it comforts you to go, then I think you should feel free to go. You didn't stop being her friend just because she was the one who closed the door.

I know this is a horrible disease. I've had the pleasure of working with CarolAnn Garrett on three of her books (at work now on the third) about her flying around the world in her little plane to raise awareness for ALS and research funds. She is just completing her third flight and you can learn more at this link: http://alsworldflight.als.net/

Thanks for your encouragement, Janice. I have until Friday to decide.
And, I'll check out the link. I always love stories about people doing such good work.

I decided not to attend the service. Instead I will send a card and note and make a contribution to ALS research in her memory. May she rest in peace.

Madeline, I believe I met you during one of the events surrounding the opening of the Geoffrey Laverty Center for the Performing Arts at Chadwick School.

I Googled information about Jill after we received the news that Jill had passed away and your entry was one that came up. I am sorry that you two drifted apart, but I like to think that life is in divine order on some level that I don't understand. I have read some entries on the Bikini Wax Chronicles blog about Jill. What a terrible illness this is.

I'm the archivist at Chadwick School, by the way. I did not attend Jill's funeral but Geoff's funeral at Hillside is imprinted in my mind. Such a rainy, terribly sad day.

I'm curious whether you did attend the funeral. Lots of Chadwick connected people did attend, I've been told.