I took my darling 16-year old friend to see "The Runaways" yesterday about Joan Jett and Cherie Currie and the first ever all girls electric rock and roll band. The film had everything bad in it: drugs, heterosexual sex, lesbian sex, smoking, swearing, alcoholism, and punk rock and roll. And out of the mouths of babes. My young girl friend, who is a very mature for her young age, wondered why the parents of the 16-year old star, Dakota Fanning, even allowed her to take on such a part. She is really a baby herself. Although she was playing a 16-year old gone awry, she portrayed experiences in the film definitely not appropriate for a 16-year old. I definitely should have done more research on that one before offering to take my friend to see it.
Well, there was redemption. Currie, got over her addictions and went on to counsel teenagers about the dangers of drugs and alcohol. And, she wrote the script for the movie. The only thing that boggles my mind is that she now is a chainsaw sculptor. I couldn't belive it when I saw that fact in the notes at the end of the film. But, yes. it is true. Here's a sample. 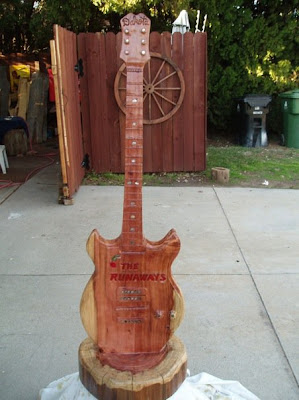