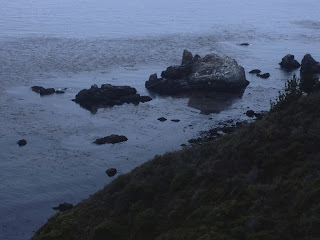 
Getting back to my poetry workshop in Big Sur a couple to weeks ago, I’ll give you some fun prompts where we were asked to write poems using a list of prescribed words. We also discussed:


And my very rough draft of a long armed poem using the words in list 1, highlighted in yellow.

On the drive up the coast
I pass through Vista del Mar
with the  Pacific Ocean
on my left.
This morning it looks like silver glass.
I get on the 405 chugging along
through the construction at Sunset
the Getty, Skirball, and the depths of
the San Fernando Valley.
It is alternating stop and go
with bursts of 80 mile an hour straight-aways.
My mind wanders, not paying enough
attention to my audio book,
Mary Coin, about that
iconic Okie lady photographed
by my favorite Dorothea Lange.
But this is fiction.
No one knows the real Mary
or even if her name was Mary.
And then when I need a breather
I can’t find a parking place
at my regular rest stop.
So I keep going
moving my feet about the floor
one pushing down on the pedal
the other pumping in and out
trying to soothe the vague pain
in my left calf.
I press my hands on the ceiling
one after the other
but my car has no room
for a full stretch.
Once I pass Santa Barbara
the hills are vast with mustard,
the sky stormy,
gray like those lingering at home
for the last few months.
I turn off the radio
and relish the silence
of driving alone and thinking
about getting to my healing place.
It will calm my nerves
after last week.
I had a blood clot ruled out.
That was lucky. If it was positive
I wouldn’t be here writing this.
The same day my husband had
carpel tunnel surgery,
the next, a seven-foot hole
that looked like a grave
dug in my garden.
And I served dinner Saturday night
for ten good friends.
We ate sushi, Tzatziki, chicken, swordfish
and my mother’s Peach Ping dessert
made from this season’s sweetest bounty.
We talked about six degrees of separation,
who do you know,
and what a small world this is
while we tried desperately
not to think of Margaret’s
recurring cancer,
her sad, scared eyes,
her thin body looking thinner yet
in all black
as we hope someone
somewhere will find
a miracle cure for her.
Yes, this is August.
I’m driving up to Big Sur
like I do every year.
It’s my time
to write some poems.
Speaking of,
this is one of them.

How about giving it a try yourself?