I'm not quite ready for the jazz scene yet 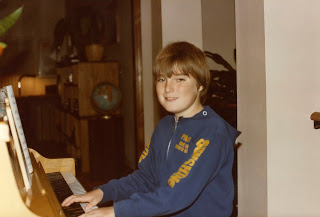 Paul playing the piano at home
The last night of our trip to Portland we all decided to go to Tony Starlight’s http://www.tonystarlight.com to listen to jazz. My brother-in-law Tom is heavily involved with the jazz scene in Portland and is the president of the board of the 2011 Portland Jazz Festival. A group of three young men from Switzerland, playing piano, bass, and, drums, performed that night.
Well I’m not sure if attending that show was the wisest decision for me. I hadn’t purposely gone to hear jazz since my son Paul died almost twelve years ago, and once there and listening to the music, all I could do was compare that group to many similar trios Paul used to play – all young men playing avant-garde tunes. However, this music was hard to listen to – quite discordant in a lot of parts, and they played nothing recognizable.
Though Tom compared Paul’s music to theirs, I feel that Paul’s music was much more melodic. He played his riffs on the high notes; they played loud chords mostly in deep dark tones. But no matter whether I liked this music or not, I realized I’m still not ready to listen to jazz. It’s too close to home. Even listening to Paul’s music is hard. No matter how long ago he died, this is not yet a place for me to go. And to have the music be less than enjoyable made it worse.
Listening to Jazz at Tony Starlight’s
After almost twelve years
I went to a jazz club
and all I could do is compare
the music at Tony Starlight’s,
played by the Colin Vallon trio
from Switzerland
to my son Paul’s.
I found theirs, described as
uncommonly sensitive,
discordant. Slow
deep bass repetitive chords,
uncommonly hard to listen to.
Paul would play the high notes,
tinkle out his improvisations
giving his music
a sweet melodic sound.
This trio of three young men,
playing piano, bass, and drums
looked not much different from
Paul’s trios of years ago.
They just weren’t Paul’s trio.
That’s the crux of it all.
Posted by madeline40 at 4:28 PM

Thank you bru, I've been wondering about you. I hope you're doing better and better everyday. I miss you on Facebook. xoxo