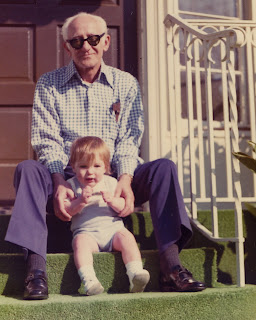 Dad with Paul, 1972
Today would be my dad’s birthday. He died in 1975 at the age of seventy-two after a year and half battle with cancer of the bile duct system. Who knows where that came from? He always lived very healthy. He was trim, he was an early advocate of health foods and one of the first health food gurus Gaylord Hauser, he didn’t smoke, and drank only moderately. I always worried a heart attack would take him since he had one at age fifty-seven, probably caused by stress. Perhaps stress was what caused his cancer. He sure had his share of it – from my mother and from major business setbacks toward the end of his life.
He was a quiet guy and kept most of his thoughts and feelings inside. That could have caused his cancer as well. I’ve heard if we let emotions out it’s better for our health.
What I most admire him for was his sense of family – he always protected us and encouraged us. He also was creative. He played the violin as a youngster, and he made sure my siblings and I studied music – we all learned to play piano. Plus he knew about interior design. As a textile salesman and fabric designer he had a wonderful eye for how to furnish our homes. I think I got my love of beauty and music from him.
He also was in love with our son Paul. Unfortunately, my dad died when Paul was three. Paul first tinkled on the piano at my mom and dad’s house, and perhaps he got an early encouragement to learn to play from my dad.
It’s now thirty-six years since he died, and though I don’t think of him often enough, I remember him well.
Happy Birthday, Dad, wherever you are.
Love, Madeline
Posted by madeline40 at 12:04 PM

Email ThisBlogThis!Share to TwitterShare to FacebookShare to Pinterest
Labels: Happy Birthday, Leaving the Hall Light On, music, Paul Sharples on the piano

A lovely tribute post. Sadly DH lost two of his brothers to the same.

Thank you for sharing your father's birthday with us.

Your Dad sounds like a wonderful man, and this is a nice way to show your love and memory of him.

Best of luck with your book launch tomorrow!

How blessed you were to have a father like him and the memories that he gave you to hold forever! Thank you for this beautiful post, for introducing us to him.

I can think of no better legacy as a parent than to be so loved and remembered so well, so long after passing from this world.

Thank you all. Gives me goose bumps.