As promised here is part two of my three-part blog about my book launch and signing. In Part Three I'll discuss lessons learned. 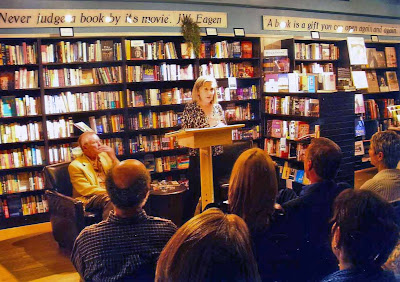 Reading at {Pages}, a bookstore
Our son Ben arrived at our house at about five thirty ready to help bring books, food, and drinks to the Pages bookstore, and by the time we got there, about six, Jetena, the receptionist from the building where I used to work, was already there. Although Ben joined his wife Marissa and her folks for dinner, Bob, Eleanor – my friend from Oakland who came down the day before to keep me calm and centered – and I opted to stay in the shop. Eleanor and I put out the strawberries, mangos and cheese cubes in a divided platter that I brought from home, Dinah, the cupcake host, arranged the mini lemon cupcakes, and the store manager and his assistant arranged the drinks – wine and waters – on a separate table, some chilling in ice buckets. They made a cute pyramid cup arrangement. 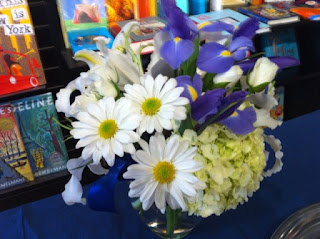 Flowers from my publisher, Lucky Press LLC,
looked great on the food table's blue tablecloth
People trickled in gradually and as I interacted with them all of my stress dissipated. Some people I had never met came in, and one came up to me almost immediately and told me the story of suicide in her family. By the end of that conversation we were both crying.
At seven thirty the room was full, people filled all the chairs and others were standing around the room when the storeowner suggested we start the reading. Also the store needed more books brought in. I had taken over five on Tuesday. and I realized this might be big when the owner called the afternoon of the reading to remind me to bring more books – they were down to one. So within an hour and a half forty-five books were sold. Ben had brought in two boxes of twenty right away and brought in another box of twenty as soon as our reading was over. All but four of those were sold by the end of the evening.
I chose to read a short piece from about the middle of the book. I didn’t want to read anything that discussed Paul’s bipolar disorder or the gory details of his suicide. I wanted something that was a little more upbeat, so I read about packing away his clothes four months after he died, explaining that this was my first step in an attempt to get back to normal (new normal). I also asked Bob, Ben and Marissa to each read a poem and speak a little about the poem they read. A few people asked questions afterward, e.g., How do you feel about putting out such personal information for the world to read? Did you consult with your husband about your decision to have this book published? Have you thought about putting Paul’s music on a CD and selling it? (I’ll answer these questions in later blogs.)
And the signing began again – with people standing in line, waiting their turn patiently to come up to me. During that time I heard several stories from people I hadn’t met and people I’ve known for years about how they had been touched my bipolar disorder and/or suicide in their families. It’s amazing how much we don’t know about people and how much tragedy and heartbreak people have in their lives. Perhaps my putting my story out there so explicitly gave them permission to tell me theirs.
And people kept coming in the door. In fact by about half past nine the store manager asked me to get people to leave, he had to close the shop and take his young helper home. Since Bob and Ben had taken all the leftover food and drinks – and we had plenty – to the car (the store wanted to keep the leftover books), we ended the evening with a few stragglers at our open 24-hour downtown coffee shop, The Kettle, to have something to eat and a final toast. That was a good thing. I hadn’t eaten anything all evening besides a couple bites of cupcake, and my heartburn – that came on suddenly like a punch right after I read – was giving me fits. 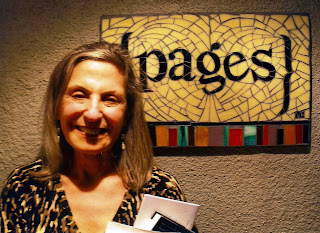 I'm the last one out the door, looking pretty tired
So this launch and signing event, as I’ve written before, was a huge success. Even though most of the people there were family and friends, selling sixty-one books was way more than I had expected. Hopefully, I’ll be able to repeat that experience again and again.
Posted by madeline40 at 1:11 PM

Email ThisBlogThis!Share to TwitterShare to FacebookShare to Pinterest
Labels: Leaving the Hall Light On, Pa, Pages: a bookstore

Wow. Sounds like it was a fantastic night. So glad it was a success, Madeline!

I missed being there, and was so glad to hear what an amazing success your book launch was. Here's to many more successful events and sales of your book. I can't wait to get my own copy which should arrive soon.

Thanks so much, Jessica and Carol. Yes, it was successful beyond expectiations. Now I have to worry about topping it.

Amazing job, I wish I could have been there! So happy for you.