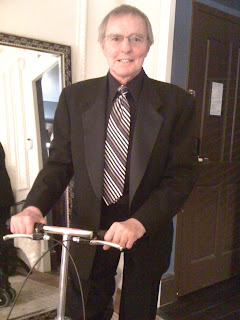 At a formal wedding last Sunday (with scooter)
My husband fell and broke his foot one month ago today. And two weeks ago he had surgery to fuse his bones together with ten stainless steel pins. Now two weeks post op he's feeling healthy again -- his appetite is back, he's free of infection, and his spirits are up. All he needs to do is stay off his foot for another four weeks - for a total of eight weeks. It's a tall order for the patient and his prime caregiver (moi), but we're committed to his complete recovery - so that's what it will take.

I wrote a poem early on about the fall. So in honor of this month anniversary, here it is:

Even A Broken Foot
Accidents are just that
Accidents
Yet some can be avoided
like my husband’s the other night.
He walked willy-nilly toward a dark room
that the hotel should have had well lit.
And while groping in the dark
for a light switch
he fell down a short flight of stairs
and was rewarded with immediate pain
in his foot and ankle.
Perhaps a quick application of ice
gave us false hope that it would take
no further care but
elevation, an Ace bandage, and ice.
But more swelling, more pain
indicated x-rays were in order.
The prognosis, a broken foot
not to be walked upon for four to six weeks
Now enclosed in a cast
and crutches prescribed for mobility
there’s whining and demands already.
So I wonder
where it says in the marriage vows
for better or worse
and a broken foot?
Posted by madeline40 at 3:07 PM