The Huffington Post had an article yesterday about Jane Fonda's facelift complete with before and after photos, and a few weeks ago it reported that she was going to release an exercise DVD for the boomer generation next year.

Well, Jane and I go way back. When we returned from Kwajalein, a Marshall Island, in the late 1970s I was used to exercising regularly – I had played tennis every day and had begun a running program, but I hadn’t yet started doing aerobics. I started that with the advent of the Jane Fonda tapes. I played tennis and I did aerobics with Jane. And that became a habit. Then once we joined the Manhattan Country Club – in the early 1980s I began taking aerobics classes there and working out in the weight room and of course the rest is history. I work out every day now. I don’t even want to think about which days I work out and which days I don’t. I just work out every day. Of course I don’t take aerobics anymore – not even step aerobics – but like today, I did 35 minutes of cardio and 25 minutes of Yoga stretches, and tomorrow I’ll do some cardio before my Pilates class. For someone almost 70 that’s quite enough.

And, I give Jane the credit. She was my exercise muse, role model, and guru. And, she hasn’t quit either. I love that she’s going to put out an exercise DVD for us old folks. That was one of my dreams a while ago – to become a trainer specializing in old folks like me. But I decided I had much too much on my plate for that. I’ll just have to be content with using the products Jane produces.

By the way I had a facelift too – but not as recently as Jane. I was 50. She just had one at age 72. And, why not? She wants to marry husband number 4, so she needs to look her best – not that she looked so bad before.

By the way, Jane, I got a short haircut right after my facelift too – to take people’s attention to my hair rather than my new face. Did you get that idea from me? 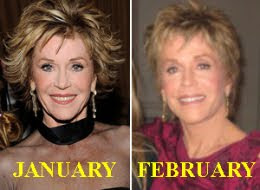